Back On Home Land 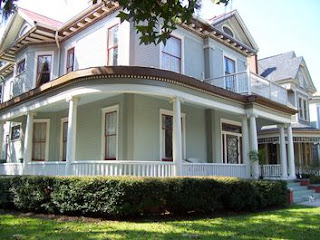 This is the picture in my mind when I'm away too long. But my return home wasn't a beautiful Savannah day - it was gray and cold and dreary. My lawn is brown, the paint is peeling, and it looks more like Midnight in the Garden of Good and Evil at high noon.

It didn't help that there wasn't really time to manicure anything. Between conference calls, lunch with the kids, errands, sorting out upcoming travel, setting up a birthday party, filing expense reports, and getting back in the swing at karate class, I only had time for one thing at home: 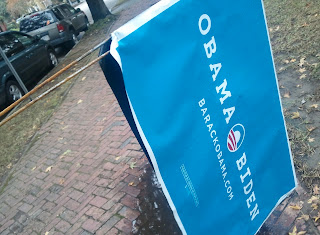 I figured it was now 9 days after the election and I didn't want to be accused of spiking the football, so I  finally picked the souvenir up off my lawn. I'll just wait by the phone for the Smithsonian to call.

When I settled down tonight I ordered a pizza, cracked open a Stone IPA and got caught up on Homeland. While I think Claire Danes's portrayal of Carrie Mathison is a little overdone, Damian Lewis as Sgt/POW/terrorist/Congressman Nicholas Brody is phenomenally layered and conflicted.

I like the second season better than the first, as the intrigue of Brody being a double agent is really reaching a boiling point. But there's still silly romance and family drama. If I'm going to watch a soap opera, it better have a lot of zombies getting decapitated on a weekly basis.

Although in the real-life intelligence community, it would seem that there's plenty of love affair sleaziness to go around. One pundit on whichever cable news outlet described the Petraeus fiasco as "The Real Housewives of CentCom." Maybe I'm too hard on these shows that romantically link all their main characters. Maybe life does imitate art after all.
Posted by BACKTIME at 10:38 PM