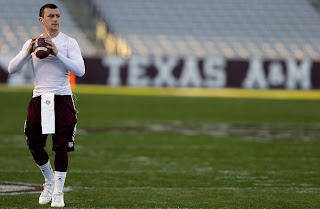 The Johnny Football Show rolled on in the season finale at Texas A&M, but not without a brief detour. Late in the first quarter, our hero went down after a tackle and grabbed his knee, and 90,000 went silent and absolutely still.

And the producer of the national TV broadcast swallowed his headset mic wondering how he was going to fill the next 3 hours. 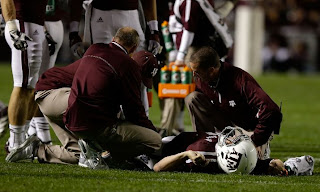 But alas it was just another plot point in Johnny Football, the movie. Manziel came back and did his usual thing: 439 total offense, 5 total TD. And despite the failed attempt for a TD reception, like the failed PAT attempt the week before, it appears that nobody's going to catch him for the Heisman. 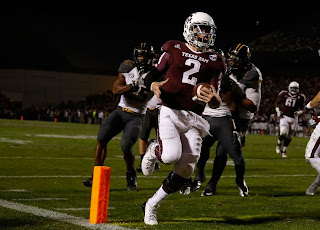 It's not that Johnny Manziel doesn't have the Heisman numbers, he certainly does. He's the single biggest impact player on any team in college football. But Heisman voters have been cool to freshmen in the past. But in 2012, who could you vote over him?

Notre Dame's Manti Te'o? Maybe. He is the best player on a tough as nails, possible national champion defense. But he isn't the best defensive player in the country, not even the best LB. That would be the Dawgs' Jarvis Jones y'all.

Kansas State's Collin Klein finishes up with Texas. But the late-season debacle at Baylor (who were obviously protecting last year's trophy) will be stuck in the voters' heads. While Manziel's season only got better as the stakes got higher, beating Alabama on the road and taking the magic carpet ride from there. The night of The Home Depot College Football Awards is Manziel's 20th birthday. The Heisman is two days later.

The Aggies' regular season is over. Manziel can't lose ground on the Heisman. And it doesn't appear that anyone else can win it.
Posted by BACKTIME at 9:39 PM