The Legend Of Johnny Football And The Perfect Storm 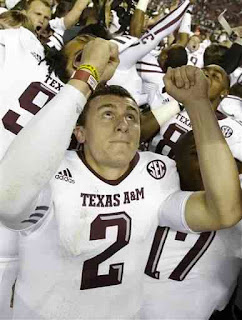 Think about the events that led to this moment. Kerrville-Tivy HS quarterback Johnny Manziel was not considered by Texas. He went to Texas A&M where he redshirted.

After a miserable 2011 season, the coach that recruited him (Mike Sherman) was fired. A big-time offensive coach (Kevin Sumlin) was hired.

The Texas Longhorns had created their own cable TV network. So Texas A&M told them to go fuck themselves, left the rivalry, left the Big 12, and joined the SEC. Texas A&M's facilities, rabid following, and most importantly their on-field program, were every bit up to the challenge in joining college football's toughest conference. They put all their faith in a 19-year old to lead them.

Hurricane Isaac wiped out a tough season opener in Shreveport vs Louisiana Tech, which cleared the way for the new Aggies to have a national rollout, complete with College GameDay in their SEC opener against Florida. Even though the home team lost by a field goal, they proved they belonged.

In his 10th career start, after back-to-back road wins at Auburn and Mississippi State, Johnny Football took his team into Tuscaloosa and knocked off #1. Now we are rightfully talking Heisman, and the Manziels are talking about trademarking "Johnny Football." 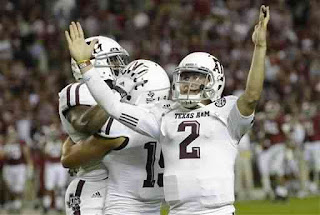 In our wildest imagination, not even for a kid who starred in the real version of Friday Night Lights, could anyone have written a script like this. But the funny thing is, the story isn't over. Not even close.
Posted by BACKTIME at 12:40 PM