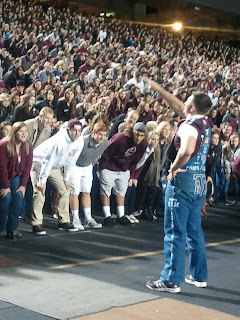 I have to admit, my profession allows me entree to some pretty cool shit. Early this morning was one of those moments. Just after midnight, I was standing down on Kyle Field by the Yell Leaders as they rallied an estimated 18,000 Texas A&M fans through their songs and cheers.

The position of Yell Leader is actually campaigned for and voted on by the student body. There are 3 seniors and 2 juniors charged with maintaing the spirit of the Aggie Nation. 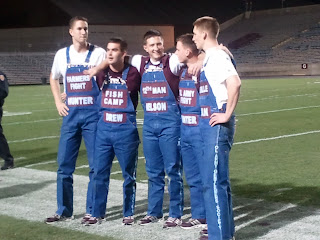 Even Coach Sumlin made an appearance. The crowds at Midnight Yell have been upwards of 30,000 in the past. I was told that the combination of it being Thanksgiving break and the weather (it was cold out there - especially for Texans) kept the crowd figure at a "modest" total. 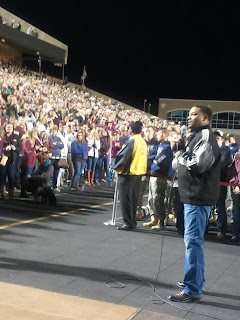 It really is the most passionate and partisan fan base in the country. To find it's rival, you'd have to go to the English Premier League. It is truly unlike every other place in the world. 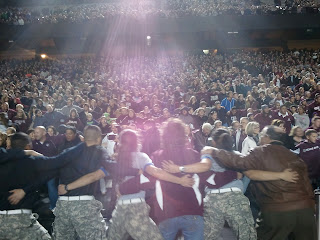 There's nothing bigger in the community than the 6-7 football weekends a year the Aggies play host to. Just this morning I saw two old ladies in a hotel elevator. They were decked out in their maroon sweaters and carrying two huge buckets of ice. I asked what all that was for and a woman in her mid-70s looked at me like I had eight heads, "To ice down the beer."
Posted by BACKTIME at 1:43 PM