Yes, The Buckeyes Can Win The National Championship 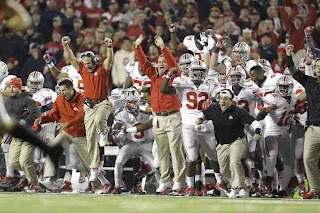 The history of college football is littered with alphabet soup national champions. Now that the BCS hands off the big glass Coaches Trophy after the last game of the season, that seems to be the championship of record.

But the BCS formula doesn't take into account, in any factor, the most acknowledged measure of college football superiority for decades: the Associated Press Poll. In 2003, USC was ranked #1 in the AP Poll, but the computers picked LSU and Oklahoma to play for the BCS Championship. Separate champions were crowned, just like old times. Shortly after that, the AP seceded from the BCS.

Since 2003, the Associated Press and Bowl Championship Series have awarded separate championships for each of the last eight seasons, although they've agreed on the outcome. This year could be different.

First, there's the curious case of Ohio State. Sanctions levied against the previous regime have left the Buckeyes ineligible for the Big Ten Championship, postseason play, and the BCS. Despite the uphill battle, Urban Meyer's first season at Ohio State cut through all the bullshit, and are 11-0 before hosting Michigan next week in their finale.

Urban Meyer has come in and done what he always does, turns programs around and then wins - a lot. His combined record at Bowling Green, Utah, Florida, and Ohio State is now 115-23. He will have the Buckeyes in the title hunt for many years (should he decide to stick around).

But this year isn't written off yet. Last night after #6 Ohio State's thrilling overtime win at Wisconsin, the AP's #1 & #2 went down, which would likely move the Buckeyes up to #4. So here's how the dominoes fall:

That set of circumstances would leave Ohio State as the only unbeaten team, with no one-loss SEC team remaining. The Buckeyes would have a great chance to finish #1 in the AP Poll. And they would be national champions.
Posted by BACKTIME at 10:42 AM