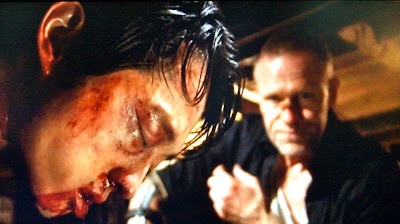 For three seasons, The Walking Dead has focused on the human stories amidst a zombie apocalypse. While the show sometimes wanders (much like a "walker") into the melodramatic, with overzealous family ties and love triangles, we always knew who the real bad guys were.

But now the zombies have gone beyond extras, they're more like mosquitos that either bite or are swatted away. The survivors' real enemies are other survivors, battling Lord Of The Flies style for the few inches of safe haven remaining on earth.

The past episode, the week before the highly-anticipated Season 3 Mid-Season Finale, titled "When The Dead Come Knocking" was by far the most gruesome and tense hour so far. People from Rick's "Team Prison" and The Governor's "Woodbury" have finally intersected. The toughest badasses left on earth are colliding off each other in Darwin's petri dish.

Lines of human courtesy have been crossed and the body count will surely mount further as a result. If you're a backwoods scrounger and get thrown to the herd, that's on you. 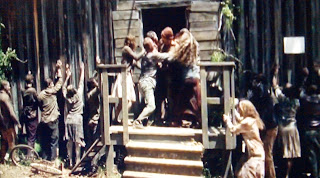 It's gotten to the point where every new "living" character is reminiscent of the nameless crew member on the Star Trek Enterprise away team, and you just know they're the next to get it. But as we've learned, no character is safe in this world, even if they're listed early in the opening credits.
Posted by BACKTIME at 5:40 PM