What State Am I In? 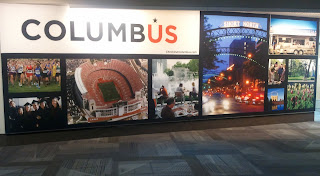 I landed in Ohio last night, and it was just after Gov. Romney left town so there was no air or ground traffic in the way. I got in a Hyundai Sonata rental (there were 25 Chevys in the National lot and none of them had XM - shame on the American auto industry!) and cruised out of Columbus.

Every news network was repeating the mantra "it all comes down to Ohio." Yet when I woke up this morning in Athens, Nate Silver had no longer listed the Buckeye State as "competitive." He had Ohio as a 91% probability of going to the President. Maybe I should have brought my lawn sign here and plopped it in front of my hotel room.

It was a crisp and beautiful 38-degree autumn morning in remote Athens, 80 minutes outside the state capital and 40 minutes from the West Virginia border. It warmed up during the day, and we're going to have some nice football weather for Frank Solich's 100th game with Bobcats, as they take on Bowling Green Wednesday night. 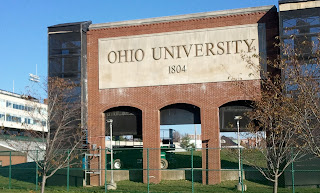 Athens is a nice progressive slice in one of the reddest portions of Ohio. But don't let the country quaintness fool you, the sorority girls are capable of some serious mayhem. 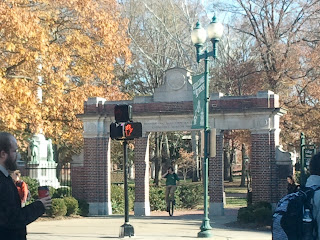 Headed out somewhere in the Court Street/Union Street area tonight, but sure to be back in the room to keep an eye on Election Day coverage.

The key plot point of the night is 11 PM eastern, which is 8 PM pacific, which is when the west coast polls close. It was the hour when the 2008 election was called for Obama. Every minute past then means that there is still some level of uncertainty, which increases Romney's chances.

But there's no way I'm staying up all night for results. I got a job to do tomorrow, and I want to keep it. I don't trust either candidate to create one for me.
Posted by BACKTIME at 6:51 PM