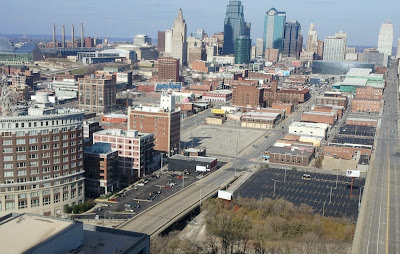 Here's a nice look from my 29th floor hotel room in downtown Kansas City. It's actually warmer here than it was in Orlando this past weekend. There's a November surprise.

When I was flying into KC on Saturday night with all the exciting primetime football going on, my mind wandered back to 2007, when Kansas and Missouri met at Arrowhead as the #2 and #3 teams in the nation.

But a lot's gone down since then. Kansas has fired two coaches and fallen flat on its face. And Missouri left the "Border War" to join the SEC.

The Jayhawks have not suffered the same fate on the basketball court - not even close. They won the 2008 national championship, and were runners-up in 2012. This year's incarnation promises to be just as dominant. 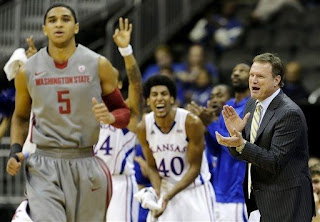 I have probably seen Kansas in person (OK in a truck right outside) upwards of 30 times since Bill Self took over 9 years ago. And they never looked as flawless and as dominant as they did in a 78-41 laugher over Washington State in the CBE Semifinals.

Freshman Ben McLemore is a potential Player-of-the-Year candidate and Senior Jeff Withey may be the most dominant big man in the nation.

Tonight KU will take on Saint Louis in the tournament championship here in KC, maybe a new border rival?

The Billikens are without coach Rick Majerus, whose health problems are critical at this point.

But he put together the foundation of a team that will give Kansas a run tonight, especially on the defensive end. Watch out for stopper and all-name team MVP Jordair Jett to be all over McLemore, but will it be enough?
Posted by BACKTIME at 11:28 AM