Today's Odyssey Is Brought To You By The Letter O 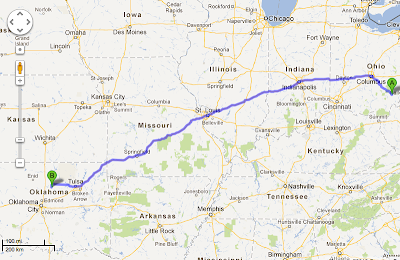 The wakeup call in the Athens (OH) came at 6:30 AM. But instead of heading directly to the airport I grabbed some free Hampton Inn breakfast, went back to the room, flipped on Morning Joe and took apart 80 pages of West Virginia game notes.

I packed up, jumped into the Sonata around 9 AM and hit the road for Columbus. It was a nice day for a drive. I made a few calls, which took me a few minutes off course. But I pulled up at the Columbus airport rental car return at 10:45, just in time to hook up with the conference call with the West Virginia coaches at 11:00.

If you're planning a vacation to see relatives in Ohio (every single person I know has one), Nate Silver is projecting an 89% chance there will be plenty of hotel rooms that weekend.

The West Virginia call got moved back to 11:30 so I went through security, found some workspace and listened in, before boarding my first flight to Detroit Metro.

I got a powernap, did some Oklahoma State prep work, and devoured a pastrami sandwich at the Irish Pub in Detroit's B Terminal. My flight to OKC was delayed about 30 minutes, but I settled into my first class seat, finished up on the Cowboys, and actually cracked open my book before we landed.

While I had status on the plane, I had none at the rental car counter. I waited about 20 minutes for a generic Malibu, and got stuck major rush hour traffic in downtown Oklahoma City. It was good timing that I could talk to the kids for a few minutes before my cell phone ran out of juice. The 70 minute drive was more like an hour forty-five.

So this long day's journey that started in Athens Ohio wound up at my Stillwater hotel at around 7:45 CT. The glamorous life of a national TV producer: out-of-the-way college towns, rental cars and long drives, commuter jets and delays, traffic jams and low cell phone batteries.

It's not too different from the adventure West Virginia fans will take to get here. At least I'm getting paid to do this. Welcome to the Big 12!

But like most stops in the Big 12, Stillwater is pretty OK once you get there. See you out tonight at Eskimo Joe's!