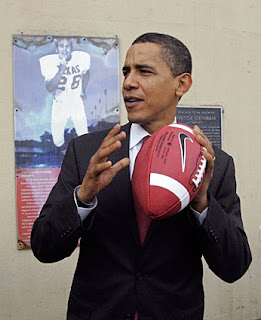 Every four years we get to this point. Football is our #1 sport nationally, full of strategy and angles, and a clock that will eventually run out. So naturally we all equate the final drive of this election season to the closing of a football game.

And the blog I filed for SavannahNow.com four years ago still holds true today, taking the football analogies right in the huddle with the signal callers.

I wasn't going to watch last night's debate because I had already voted, but the dynamics of the process are far too fascinating to turn away from. I especially like how football is so ingrained in the analysis of the TV commentators.

How often did you hear that McCain needed a "Hail Mary" or that Obama merely had to "sit on his lead" or "run out the clock." There are plenty of boxing analogies too, but they aren't as fun. So I decided to take it a step further and compare the two candidates to former NFL Quaterbacks.

Barack Obama is Troy Aikman. Each came from limited means and had to overcome early career adversity. Obama lost his first bid for the U.S. Congress. Aikman had to transfer to UCLA after losing his starting gig at Oklahoma. But after some seasoning, and surrounding themselves with talented and well-versed ensembles, they exude cool, charisma, and confidence. And then they became champions.

John McCain is Archie Manning. The un-polished, over-emotive, scrappy risk-taker who gave his all. But because of a motley crew of flunkies at his side, and some terrible decisions of his own, not even his great determination could lead him to the top. His spirit will win legions of fans, but he will inevitably lose the big showdown.

Obama "took a knee" last night when the Governor Palin question came up. He could have unloaded on her the way she has on him. Lord knows, there's plenty of material. He could have expanded his lead and "run up the score" but he took the high road to win with class.

Maybe you favor the loveable loser over the collected champion. That is your right. But don't expect a monumental comeback on November 4, because your heart will be broken again.

So who is Mitt Romney in this cosmic political gridiron tapestry? I'm going with Chris Simms. Romney, like the younger Simms, was born into royalty in his field. He had all the tutelage, grooming, and good hair one could possibly need to take the world by the balls.

Simms set records at Texas and Romney tore up the private sector, but when it was time to go pro the results were tepid at best. Simms's career NFL record of 7-9 is akin to Romney's record as as Massachusetts governor, where Romney claims to have coexisted in a bipartisan fashion with the state's legislature but had over 800 vetoes over-ridden.

Ultimately both lacked the toughness necessary to succeed at the highest level, and are resigned to live out the remainder of their careers inconsequently and on name recognition alone.
Posted by BACKTIME at 11:11 AM