So today it began. Gone for 12 days. Holidays? What Holidays? I got a cash register to ring up. I got everything done at home (I hope) and won't return until January 1. Don't worry y'all, I set the alarm before I left.

If the Mayans are correct, which is hard to imagine since they don't exist anymore, then I won't be returning at all. But in the meantime I will tackle the tasks in front of me.

The first leg of the trip was a mid-afternoon flight. The network must have had to save money on holiday travel because I was not on my preferred airline. Which meant a $25 check baggage fee, and almost an additional levy on top of that as my fortnight suitcase came in at 48 lbs, just under the oversize limit.

I flew coach both legs, first to Charlotte, and then a window seat in the last row to Dallas. We were fighting heavy headwinds so we landed in Dallas a half-hour late. Then I waited 30 minutes for the bag and 20 minutes for the rental car shuttle. Then I looked around the lot for about 10 minutes before finally stumbling on a vehicle with satellite radio.

After a brief bout with construction and traffic, I was in Waco less than two hours later. Got Baylor hoops hosting BYU tomorrow evening, and BYU football is on the big screen right now at Cricket's where they have about a hundred beers on tap. 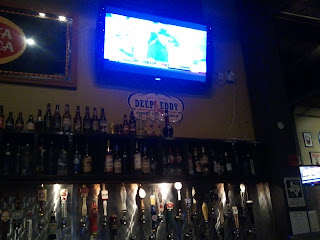 Cricket's was where I watched the SuperBowl four years ago. It was the Pittsburgh-Arizona classic where Santonio Holmes was a Steelers hero instead of a Jet malcontent.

Alright, Waco tonight. Driving back to some airport hotel at DFW after the game tomorrow.
Posted by BACKTIME at 11:26 PM