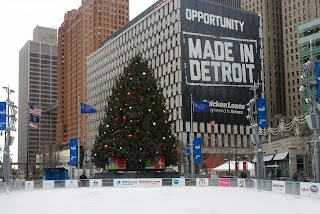 "Twas Christmas morning in Downtown Detroit. Not a creature was skating, but the trees were just the right hoit."

This is my 7th Christmas in Detroit assignment, so it's become very familiar to me. Being in the TV business, I'm not a big holidays guy.

I've worked full-time on college basketball since '93 and college football since '96, however when I wanted to break in as a MLB producer in 2000, the opportunities were rare. But there was almost always a slot for me on Memorial Day, July 4th, and Labor Day, when the network would run games all day.

And for years I worked the Egg Bowl, the annual battle between Mississippi and Mississippi State on Thanksgiving Day. That's actually how I met the mother of my children - a story for another time.

So I rarely make plans with family or friends on the holidays, I try and fill my schedule. I use the time to provide for my family instead of spend it with them.

While I'm desensitized to Christmas (because I am a working professional and Jewish), I'm not exactly bah humbug. I still get into the spirit somewhat. I've seen It's A Wonderful Life dozens of times, and I enjoy Christmas music. Except for Baby It's Cold Outside, which has been described as a date-rape anthem.

In previous years we would stay at the GM Renaissance Center, which wasn't bad, but removed from downtown Detroit. It's farther away than it looks, and on the 70th floor you're practically in Canadian airspace where cell phone service is very dicey. 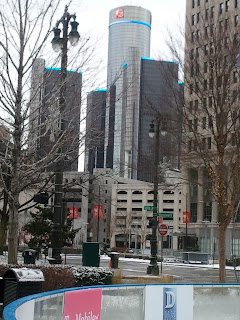 So this morning I took a walk. It was kind of a ghost town on Christmas morning. Even though hockey is out, the Zamboni guy was working the rink at Campus Martius. There was a dusting of snow from Christmas Eve, and no sun this morning. Having lived in Michigan for three years that's not unusual.

And if my soul was any bit empty from the dreariness, solitude, and cold, that got remedied at American Coney Island with a 10:30 AM chili dog.

OK, back to business. But first a side trip to see my sister and brother-in-law in Toledo, who are doing the holidays with his family. Everybody in the world has family in Ohio.

Merry Christmas.
Posted by BACKTIME at 11:59 AM