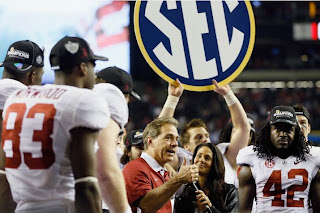 I know a number of Jawja fans that are replaying yesterday's epic SEC Championship game in their minds, rationalizing between the Dawgs' great effort and the misplayed last few seconds.

The game-winning score was definitive, when AJ McCarron went up top to Amari Cooper for 45 yards with 3:15 left to take the lead for good. But the game-winning pass was set up by Alabama's bruising running game that shredded Georgia's star-studded defense for the entire 2nd Half. 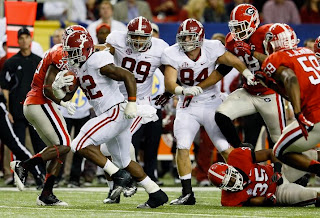 Alabama rolled for 350 rushing yards, and Eddie Lacy and T.J Yeldon ran over, through, and around the Dawgs. Check out the 2nd half entries from the game's play-by-play:

That's 10 big running plays in the 2nd half, many of which were with Alabama trailing and in comeback mode. It's not surprising that the play that immediately set up Cooper's TD catch was a 5-yard run by Yeldon on 3rd & 5. And in the overall tapestry that set up a game-wininng long pass, Alabama had run on 20 of their previous 22 plays. 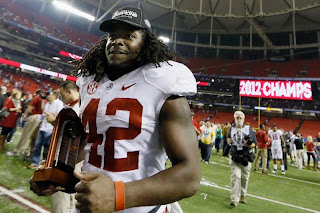 Eddie Lacy gets the MVP award, and I would save his game jersey with Georgia defenders' DNA all over it.

Now Alabama gets Notre Dame, trying for their 3rd BCS title in 4 years. And while I'm an expert, I'm not a professional. I put the line at Alabama -13. Although Brian Kelly was in attendance in Atlanta yesterday, and he got to see his opponent up close before he gets to see the film. You'd think that would be an advantage, but it's really just scary.
Posted by BACKTIME at 10:03 AM