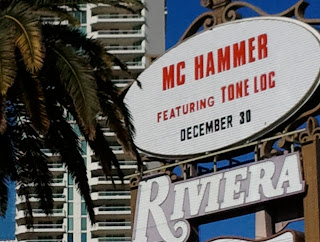 That's the street sign across the street from my hotel. No bad act ever dies, they just play half-filled theaters in Vegas.

That's why after the sports were done yesterday, I went to the show at my hotel: Jimmy Stewart and Friends starring Rich Little. But I wanted to go, and that officially makes me old and washed up.

Little is 74 now, and the impressions are still very good. The one-man act is Jimmy Stewart narrating the sequence of events of his life, with the interactions of others along the way.

Little of course nailed Johnny Carson, Andy Rooney, Cary Grant, and Ronald Reagan. His one foray into the modern was a riff from the Geico voice-over guy.

And there was some creative stuff too as Little reenacted a scene from It's A Wonderful Life with Lionel Barrymore as Mr. Potter and George Bailey, played by Humphrey Bogart.

The crowd, which I estimated at 250 or so, was there because they remembered how big he used to be. They were and older and whiter Fox News crowd, and Little threw some Republican bones along the way.

It was a good show that Little is trying to take to Broadway (or at least the Catskills), but he could use an infusion of some popular culture. Maybe Simon Cowell, Chris Berman, or even a little Joe Biden would liven up the act. But that's just some unpaid advice.

The advice you can count on me for in Vegas is: drink water. If you're drinking or smoking (smoking is still everywhere here), in the steam room, or just out in the desert air, keep yourself hydrated.

Now here is where you would probably be not too wise to take my advice, since I haven't made a football bet in a year:

I don't generally like road favorites. But the Colts can clinch a playoff spot, their coach is returning, and they've got a goal-oriented Andrew Luck at QB. The Chiefs have folded the tent. This one will be done early.

A desperate team at home against the most inconsistent team in the NFL. The number that popped into my head was 41-14.

That's an awful lot of points to get at home against anyone. And the Patriots are ready for a let down after an emotional comeback came up short last week vs San Fran. And they go on the road to the most dreary and lifeless stadium in the NFL.

The Broncos are 11-3 and shooting for a bye if not home-field. They've won 9 in a row while only playing two home games since Halloween. This has got the makings of a late afternoon snoozer all over it.

So there you have it, three home teams out of four, three favorites out of four. Three out of four would make for a very good day.

But in the meantime, here's some exceptionally bad advice: 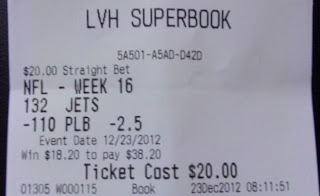