There are moments of serendipity in life. Like Turner Sports scheduling their 1996-1997 NBA production seminar at CNN Center the same week that the Yankees (in their first World Series in 15 years) faced the Bravos in the Fall Classic. It was also the swan song for Atlanta-Fulton County Stadium.

So I was flown down to the 404 and put up at a hotel on Turner's dime. A buddy at Fox got me face value tickets to Games 3 & 4, and a high school buddy was living in Atlanta at the time. So everything fell into place. It didn't matter that the Yanks were down 2-0 and had looked highly overmatched, I was watching my team in the World Series.

The Braves were the defending World Series champs. I knew this well because they were selling T-shirts outside the stadium that said "Been there, Done that." I also had worked the '95 NLCS when the Braves swept the Reds and now saw their fans as highly over-confident.

I arrived at my Fox-issued seats, and found we were sitting next to Mr. & Mrs. Jerry Glanville. He was a good guy and there are pictures, but it was before the age of digital images so they're buried on paper somewhere.

Game 3 was about survival and David Cone was all grit, fighting his own control and giving up just 1 run through 6 innings. Bernie Williams' 2-run bomb off Greg McMichael in the 8th pretty much sealed it.

Game 4 is obviously one of the great games in World Series history. You all know the story: The Yanks were down 6-0 and cut the lead in half. Mark Wohlers hung a slider to Jim Leyritz who tied it with a smash that keeps flying to this day. Then in the 10th, Steve Avery walked Wade Boggs with the bases loaded. I know exactly what happened because it was documented properly as a personally-attended World Series game should be. 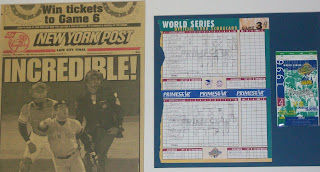 Game 5 was the last ever game at the old ballpark, but I was already in East Lansing by then and I watched the epic at a Buffalo Wild Wings. On a field that featured such crafty throwers as Phil Niekro and Steve Bartkowski, Andy Pettitte out-gunned John Smoltz in one of the great pitchers' duels of all-time.

Game 6 was Saturday night. I delayed my flight out after the Wisconsin/Michigan State game until Sunday. I wanted to make sure I watched the game and not just the celebration. I sat in the same seat at the bar at the wing joint and celebrated alone. The next day was Daylight Savings Time ("fall back") and I still missed my flight. I didn't feel like a world champion.

I drew the Georgia Dome double, the 4th different Atlanta venue I worked at in 1996 (5th if you count CNN Center). Peach Bowl on the 28th, Heritage Bowl on the 31st. I was a hungry and energetic associate producer at the time, and both of those adjectives would be tested by the end of this particular trip.

Since I was a young and desperate underling, I took a producing gig on my day off in between games - a college hoop game in Louisville. It was my 3rd ever producer assignment and there was no flight from Atlanta to Louisville that would have allowed me to make my Sunday early-morning call time.

So immediately after LSU (led by Kevin Faulk) beat Clemson 10-7, and Tiger Rag running on an endless loop in my head, I beat the crowd of 63,000+ to my car and launched the 6-hour drive to Louisville.

But it didn't take 6 hours. There was a stretch where the interstate was closed, so I stopped in a Waffle House (way) outside Nashville at 3 AM, and it was like the Star Wars bar scene: A smoke-filled grease pit complete with off-duty strippers, a biker gang, and a waitress with a goatee.

I made it out alive, got to the hotel, slept 3 hours, printed out my paperwork, and produced a Louisville-Boston College Double-OT thriller. That barely gave me time to make a flight back to Atlanta, and certainly didn't give me any time to eat.

I was exhausted and starved, but I needed to hunker down and dig into some research. I grabbed a chicken sandwich from Wendy's and retreated to my hotel. A couple of hours later I was jarred from a nap, and bolted to the bathroom.

My first ever bout with food poisoning had me largely incapacitated for the next 12-18 hours. I didn't go back to Waffle House or Wendy's for several years.

I was useless during the set day, and was even ripped repeatedly by my producer for working on my off day, and not focusing on our show. I couldn't even hold down toast much less fight back. "Quit ridin' me asshole!" was the best retort I could deliver, a surrender flag which I suppose could have gotten me fired. There is one friend of mine in the business who delivers the line back to me every time we reconnect.

On gameday I was marginally better, and performed well on the show. It was another thriller. The Howard Bison edged the Southern Jaguars 27-24 in the then-annual MEAC/SWAC showcase.


Most importantly it was a Noon game on New Year's Eve, and I was able to fly back home to NYC in time for a girlfriend and a party. Atlanta, and 1996 itself, was in the rearview mirror.
Posted by BACKTIME at 8:12 AM