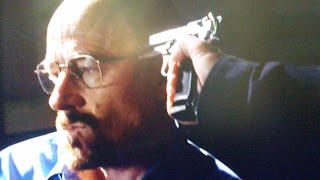 We know why the show is called Breaking Bad. It goes back to the very first episode when cancer-afflicted, unfulfilled middle-aged high school science teacher Walter White decides to get into the meth business.

His former student, Jesse Pinkman, becomes a partner in the scheme but fails to understand, "Some straight guy like you, giant stick up his ass, age what - 60? He's just gonna break bad?"

So we don't know the old Walt (except for a handful of flashbacks), but the current Walt is not only beyond repair, he is beyond belief.

Is it that the character is broken, or have the show's creators made him that way? It's an important distinction. If Walt's behavior is unbelievable to the show's fanatic audience, then maybe the show has jumped the shark.

In Season 5 Episode 6, "Buyout," it all comes the closest to full circle that the show has ever been. It's done through talk - which I don't like, but it's done with Jesse in Walt's living room of all places where his wife could walk in at any moment - which she eventually does.

The scene where Walt pulls a James Bond/MacGyver to escape handcuffed detainment is more believable than the scene where he reaches into his darkened soul to tell Jesse his reasoning behind the refusal of a $5 Million buyout. 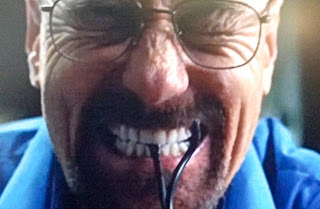 It doesn't explain why Walt has decided to live at home while Skyler won't allow the kids to live in the same house, rather than living in the place he had originally moved out to and already owns. Except that we are expected to believe that he is stubbornly going to turn her.

And the same logic applies to Walt's dogged determination to press Jesse and Mike to continue their operation, rather than simply sell out for millions each.

As much as we love the series, we are begging Walt to be sensible. But he's just as obstinate with us.

Jesse references their conversation from the Season 2 premiere "Seven Thirty Seven," when Walt had figured out the math that $737K was all the money he needed, before the cancer killed him, to set up his family.

Jesse asks Walt if they're in the meth business or the money business. Walt seethes that he's in the "empire business." Jesse asks if that's really something to be proud of.

Walt rants about the one time he sold out in his past, trading in his stake in "Gray Matter" for a few months rent, while his partners Elliott and Gretchen Schwartz built a multi-billion dollar business.

So in just a year's time (theoretically), Walt's motivation changed from his family's security to being king. It's an unrealistic transformation. Unless Walt had already broken bad, and the misery inside him was just looking for an excuse to express itself.

That's if the writers can make us believe that the sympathetic anti-hero we've been rooting for is actually, truly evil.
Posted by BACKTIME at 5:27 PM