Who be GOP VP? Process of Elimination

It's Friday August 10. It's a week that Mr. Romney has seriously slipped in the polls (Obama +9 in latest FOX News sampling), and it appears more than ever he will need a "game changing" VP pick.

Since it is illegal to make wagers on such things in the US, except for Intrade (but call them contracts), we go to Ireland where you can gamble on anything. Here is the morning line from PaddyPower.com. 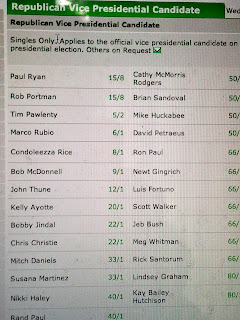 The best way to approach this list is to forensically determine why they won't get picked and see who's left standing.

Paul Ryan (15/8) - Very fashionable of late, but likely a smokescreen. His budget plan can be tied to slashing of Medicare and will be a target for a huge voting bloc. But he's also a prominent member of the House of Representatives, part of the most unpopular congress ever. Out.

Rob Portman (15/8) - Puts Ohio in play for Romney - Nate Silver and 538 says it's GOP's best chance to turn a state, but very low-profile and would be unable to lift ticket in national polls. Doubtful.

Tim Pawlenty (5/2) - Has some name recognition, and a good mouthpiece. Wouldn't enthuse or alienate anybody. Possible but meh.

Marco Rubio (6/1) - I think Dems have been holding out on him, waiting to unload if he is chosen. There appears to be plenty beneath the surface in his personal history as well as his personal finances. Could be more toxic than Palin. Impossible.

Condoleeza Rice (8/1) - Very popular, huge name recognition, bridges race and gender gaps. But stances on social issues would create further rift in GOP than there already is. No way.

John Thune (12/1) - Very effective surrogate. The American Conservative Union gave him a rating of 100 in 2010. Hardcore Christian. There's been no real buzz about him to this point, so he can make a splash. The smart pick.

Kelly Ayotte (20/1) - Don't know anything about her. A Massachusetts/New Hampshire combo on GOP ticket? Never going to happen.

Chris Christie (22/1) - Political aspirations too high to be in a very likely losing election. Biding time for 4 years. He'll say no.

Bobby Jindal (22/1) - Will be problematic in the post-vet, after having been party to an exorcism in his past. Voodoo is fine in Louisiana, but not for the nation at large. No chance.

So I think Thune is a great play at 12/1, but if you want to look deep on the board consider these two:

Mike Huckabee (50/1) - Conservative, religious former southern Governor who would bring a level of consistency that the campaign has lacked to this point. His radio/TV gig might be a little lucrative to give up, but he probably wouldn't be out of it very long and it would only boost his national profile.

Ron Paul (66/1) - Stranger things have happened. If the "money" part of the GOP can assimilate "the base" it might be their best shot. But Paul is a maverick with steadfast convictions and it's doubtful there's a sweetheart deal he would ever accept.
Posted by BACKTIME at 11:21 AM