What are the odds that Ernie Els and Vijay Singh, Hall-Of-Famers but afterthoughts, could each win their 4th major within a month of each other? Singh's comeback would be especially far fetched since he's just 6 months from his 50th birthday and a life of luxury on the Champions Tour. "Glory's Last Shot," indeed.

But there's a long way to go. No bold predictions here. Singh (-6) still has 29 holes to complete on Sunday, while tied with superstar Rory McIlroy who's less than half his age.

3rd round play resumes at 7:45 AM and Final Round threesomes at 11:45. The round and a half to go brings many more from the field into play. Bo Van Pelt (-3) and Steve Stricker (-2) get the morning off. Major championship horses like Graeme McDowell (-2), Padraig Harrington (-1, only 18 left), and Tiger (-1) still lurk.

TNT is a big winner as well with remaining coverage of the 3rd round beginning at 8 AM. And it's not like there's anything important going on with the Sunday morning news programs anyway.

A hundred storylines could develop with all the golf remaining, but one of the best is the roadmap to redemption. 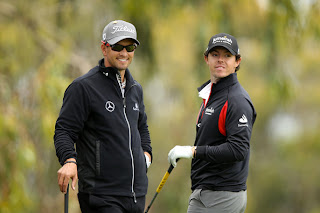 In 2011, Rory McIlroy had a healthy lead going into the final round of The Masters and completely imploded. We'd still be talking about the choke job except he came out in the very next major and lapped the field at The US Open.

Now is it Adam Scott's turn? He's just one shot back with 27 to play, and can quickly erase the debacle of last month's British Open and claim the major he's been ready for for years. He was rolling with 4 birdies in the last 5 holes before Saturday play was suspended.

And of course there's alway's the one no-name who seems to creep up and win the PGA as often as not in the last 10 years:

So historical precedents have been set, there are footsteps to be followed, glory to be re-claimed, demons to be exorcised, and new names to be etched in history. Sunday should be some pretty riveting TV.
Posted by BACKTIME at 12:25 AM