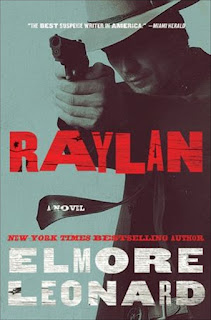 Finally. It only took 6 weeks. Not that Raylan didn't move, it could've been polished off in 2 days. But getting your book ingestion done isn't about what you read as much as where you read. I haven't been in a school car pick-up lane or in the upright-and-locked position on a plane awaiting takeoff in months.

So while I've been consumed with family activities and feeding this site with dime store opinions, I inched through the latest Elmore Leonard novel - a sturdy companion to the great TV series Justified.

The book is kind of like a TV series in itself, a collection of situations in which our favorite Deputy U.S. Marshal Raylan Givens finds himself. There is no over-arching master-criminal like a Mags Bennett or a Robert Quarles on which a given season of the TV series hinges upon.

And the satellite characters aren't really developed, by design. Ava and Winona make brief appearances, and there's backstory, but they don't figure into any of the storylines. Boyd Crowder has a role, but it's more as mining company exec lady's right-hand man, than as Raylan's best "frenemy."

Raylan's conversations with his boss Art Mullen are still priceless.

The characters that are best-drawn are the series of criminals and fugitives that are all clever enough to have some success, but stupid enough to try to get around or through Raylan:

Layla, the cold-blooded OR nurse that cuts out kidneys in hotel bathtubs and sells them back to the victims as parts.

Delroy, the strip club owner who gets his girls pumped up on oxy to rob banks.

Elmore Leonard is an equal opportunity portrayer of bad guys. Man, woman, rich, poor, white, black, or other - they all fit in Harlan County, Kentucky. And the writer's top-notch dialogue makes them all engaging enough.

Raylan is just as quick-triggered as we know and love, putting down criminals or blasting the hat off some thug muscle just to make a point. And as far as the borderline women go who tempt Raylan, he stays all-business. Strike that, rather primarily business.

There's Jackie Nevada, the 23-year old college poker phenom who skips on the cops after she loses 20 Grand at a raided card game before she winds up on Raylan's radar, makes all her money back and a whole lot more, and gets Raylan to...