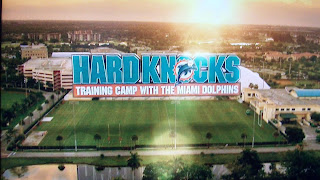 After a one year lockout-forced hiatus, the best reality series in the history of television has returned in a big way. Let's face it, while most reality shows offer some level of staging, an NFL camp is hyper-reality.

I remember the first season of Hard Knocks when the defending SuperBowl champion Baltimore Ravens were featured, and Brian Billick taking the call in his kitchen that the team's leading rusher Jamal Lewis was out for the season.

In 2010, we witnessed ground-breaking TV when Jets GM Mike Tannenbaum gave QB Kellen Clemens the option to accept a demotion and a pay cut, or accept his release. The very last scene of the 2010 season had All-NFL cornerback Darrelle Revis striding back to camp after ending his holdout, calling his teammates in for a 1-2-3-Jets!

In 2012, Hard Knocks visits South Florida, and mashes the glitz and babes of Miami with the sweltering heat of summer into the best opening title sequence yet.

This year HBO and the Dolphins seemed to have no designs toward additional drama, until we saw Dolphins coach Joe Philbin's sit-down with troubled receiver Chad Johnson.

It was the day following Johnson's arrest on a domestic dispute, and the moment was so real it made me  feel uneasy to be in that room. Johnson was as we had never seen him. He wasn't the usual self-promotinal blowhard with 3.7 Million Twitter followers. He was contrite and humiliated after the worst day of his life.

And Philbin handled it professionally and gracefully. As a man who lost a son this year, he showed all the human qualities of a leader. You could see it was hard for him to say the words "part ways." But the Miami Dolphins weren't going to be on board with the drama. The cameras followed as a silent and tattered Johnson was escorted from the facility. Now that's reality.

Now what else could be bigger on a training camp reality show than that? How about a real-life quarterback competition? Check.

The 3-way battle is between last year's starter Matt Moore, veteran David Garrard, and rookie 1st Round pick Ryan Tannehill. Tannehill is obviously the future, but he could be the present as well.

I thought it was strange after Tannehill rocketed up the charts before the draft, that the commentators thought he still needed to be groomed into an NFL starting QB. Here was a guy who was smart enough while at Texas A&M to:

1) Play wide receiver at a high-level for 3 years after not winning the QB job.

2) Move right into the QB spot in the middle of his junior year.

3) Graduate with honors in molecular biology.

OK, so part four isn't really part of the equation for being the starter. But having your college head coach, Mike Sherman, as your NFL offensive coordinator is. Especially when your NFL head coach Joe Philbin, was hired by Sherman for his first NFL assistant job with the Green Bay Packers.

As a lifelong Jets fan, I have hated the Dolphins. But for the next few weeks I am devoted to them.
Posted by BACKTIME at 6:49 PM