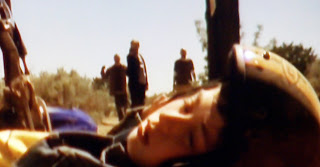 "This is the business we've chosen"

In The Godfather: Part II, Hyman Roth didn't ask Michael Corleone who gave the order to kill his friend Moe Greene. It had nothing to do with business.

In Breaking Bad, despite Walt and Jesse's best intentions to run a multi-million dollar illegal meth operation without bloodshed, extortion, and drama, there's nothing that changes the business they've chosen. There will always be innocent blood on their hands. 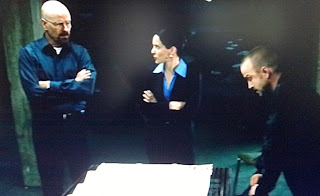 "Give me a break, you we're gonna murder me. I thought you were professionals."

Lydia Rodarte-Quayle is quickly establishing herself as a major player in Season 5, as Madrigal's last "man" standing in the U.S. operation. She is frenzied but savvy, and she saved her own life a couple of times already.

She hatches the scheme to rob the train transporting methylamine, but can't understand what the reservations are about killing the train's crew. 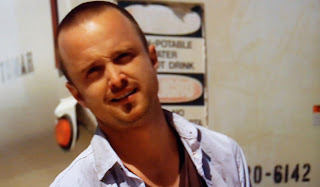 "Boosting methylamine from a train is like a major rap. The point is, nobody, other than us, can ever know this robbery ever went down."

Jesse said it, and Walt seconded for their new henchman, Todd from the pest control operation, so they were perfectly clear. Too clear obviously.

Jesse has been the criminal with the heart from the beginning. While Walt and Mike argue incessantly about how much human damage needs to be done, Jesse now stays out and thinks. He came up with the "magnet" plan, and had the insight to turn the train heist from "armed robbery" to just "robbery."

Oh by the way, Skyler noticed the soot on Walt's pants after the dry run and sarcastically asked if he was out burying bodies. Walt said pridefully that in fact he was robbing a train. Don't think that won't come back. There isn't a throwaway scene or line or cutaway in this series.

So the pulsating train heist goes down with some speed bumps along the way. The track interruption ruse gets foiled prematurely and Jesse almost gets flattened when the train gets moving again, but they pulled it off and got all their meth.

Except the poor kid riding his bike in the desert collecting tarantulas, who happened upon the heist celebration. Todd isn't in the operation's inner circle and didn't know the lengths they went to avoid a body count. He figured he was working for "professional" gangsters and promptly shoots and kills the kid, as he thought he was ordered.

So now Walt and Jesse are caught in their own vicious circle. They went against Gus Fring and started a war because of his willingness to make a child (riding a bike no less) expendable, as the cost of doing business.

Now it's their business, and they gave the order. Whether they chose to or not.
Posted by BACKTIME at 6:14 PM