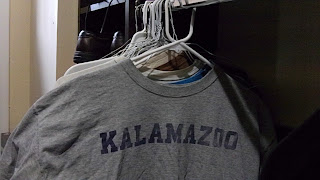 I don't have some killer wardrobe. I work behind the scenes in television. On-air types have dozens of suits, and women talent have been known to amass much, much more. My fashion statements are made through my T-shirt collection, mostly during the summer when I'm off the job.

Signature tees are an emerging internet industry. Like anything unique, you're likely not going to find it at the local department store. CafePress and Zazzle are two of the leaders in terms of selection, irreverence, and design. Amazon and Ebay are mainstays, but they don't specialize in tees. Be careful as many places have good stuff, but are are fly-by-night. Try to use PayPal whenever possible in those cases.

Anyway, without (much) further ado, here's Backtime's summer rotation Top 5, and where they came from: 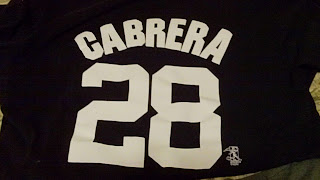 Since the purchase, Melky changed his number from 28 to 53, won a World Series with the Yanks, was traded to the Braves, stunk for a season, and was released after 2010. He signed with KC in '11 and had a great year, was traded to SF - where he's currently batting .355 and is a legit MVP candidate. My faith in him has been well-rewarded. 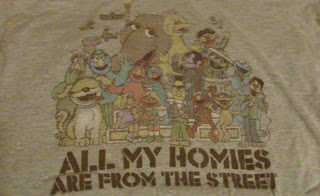 This one's faded a bit, but it fits great and the kids laugh every time I put it on. Perfect for school events, camp pickups and afternoon activities. Lots of chuckles from young moms of all races. 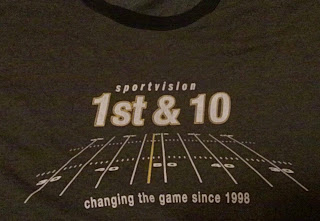 A real rarity, only received by a few in the TV football community. Sportvision is the technology company behind the incredible innovations in TV sports. In addition to many of the mind-boggling race tracking gadgets in NASCAR and MLB's K-Zone, they created the single greatest invention in TV sports in 1998: The 1st & 10 "yellow line" on football. What did we ever do without it? The T-shirt is beyond a collector's item, it is a historical treasure. 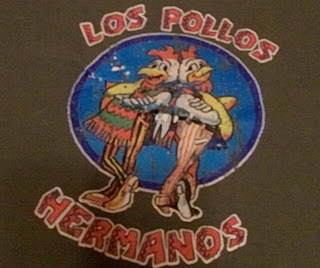 The establishment is dead, along with its proprietor Gustavo Fring (should I have issued a spoiler alert?), but brand recognition in the meth community and on Tybee is still king. I saw that season 5's new "front," Vamonos Pest Control shirts are already out. Get 'em while they're hot. 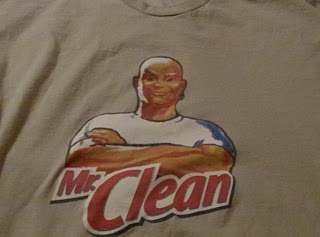 Of extraordinary value. It's the moniker bestowed on me by my martial arts Master. I followed through with the shirt when I reached a certain level of achievement. I rarely bust it out for ordinary events, like a lap or two around Forsyth. I almost feel like ironing it before I wear it.

The honorable mention title shirt "Kalamazoo" (some mall in K'zoo, 2006) from the closet is suffering from too much use over the years and frayed around the collar. Treat your tees with respect and they will pay you back handsomely for years!
Posted by BACKTIME at 9:59 PM