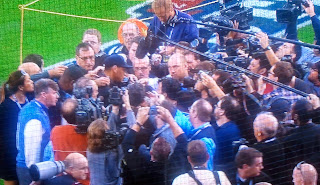 "Now this looks like a job for me so everybody just follow me, 'cause we need a little controversy 'cause it feels so empty without me."

I could not let the 40th birthday of Eminem slide without injecting his brilliant words into the events that played out that day, especially in the hometown of the Detroit icon.

I had a number of things to tackle all afternoon in the house yesterday, and I had no interest in any more Hofstra debate post-mortem. So I made the mistake of turning on Mike Francesa - not because it wasn't compelling - but because it was. The feeding frenzy around Alex Rodriguez has reached epic proportions, as pictured above.

They Yankees are down and nearly out. Trailing 0-3 to the very legitimate Detroit Tigers isn't the story. The Yankees' exceptional pitching isn't the story. The anemic Yankee bats are. But Robinson Cano, Nick Swisher, Curtis Granderson, and Russell Martin didn't have the media swarmed on them. Only Alex. Let me try to explain how a lightning rod works.

The building stands in the path of an oncoming electrical storm.
In order to deflect attention from the vulnerable foundation, the lightning rod is there to attract the storm's blast and channel it away from the larger structure as a whole.

The lightning rod has no say in the matter. It's sole purpose is to stand idly and get struck by a bolt of lightning.

And while A-Rod seems often like an automaton who has no humanity or feelings, he shouldn't stand alone to take a strike.

Although Rodriguez isn't alone among Yankees experiencing offensive woes, he is the most visible. And none of this would be an issue if he were producing. He has been his own worst enemy, going 0-for-18 vs RH pitching in the playoffs.

A-Rod stood and faced the media storm yesterday. He was introspective, calm, and outwardly remained confident in both his ability to hit, and ability to contribute to the team. He dropped an "I don't give a shit" at one point, but it was his only real defiance. He was as professional as anyone could possibly be in that circumstance. 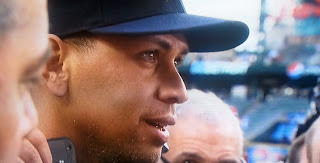 So the airwaves are clogged with A-Rod talk now. Was there a pickup attempted of an Australian model during an LCS game? Have the Yankees already discussed trading him to the Marlins? Will he ever see game action in a Yankee uniform again?

GM Brian Cashman met the media yesterday and called A-Rod's benching a "baseball decision" because of the splits versus right-handed pitching, inferring that he'd be in there against a lefty. The Tigers have no left-handed starters, and the Yankees are one game away from the 2012 season being over. And don't expect the storm to pass in the off-season.
Posted by BACKTIME at 5:05 PM