They are two parts of me, my two sports teams. (The above symbol fits my two children as well, but that's another post for another site.)

They are the sun and the moon, order and chaos, heaven and hell. The New York Yankees and The New York Jets. They don't even really belong together. Most metro New Yorkers are either Yankees/Giants or Mets/Jets.

The New York Yankees are the gold standard. They don't always win, but it's hard to be disappointed with the results: 5 World Series titles in my adult life, and they've made the playoffs every year except one since 1995. But more than that, they make a great team to follow night in night out, year after year.

People talk about the Yankees being rich and buying their way to titles. It's partially true. But throwing money at players doesn't guarantee success. Ask Dan Snyder and the dynasty he's built in Washington.

The Yankees had the foresight to grow Derek Jeter, Mariano Rivera, Andy Pettitte, and Robinson Cano through their system (as well as Yankee modern legends Bernie Williams and Jorge Posada). It is a top-notch organization in every sense.

Then there's the New York Jets. They last appeared in a Super Bowl a month before my birth. Yes they've had some good years, great players, and some memorable playoff upsets, but they always ultimately implode and break your heart.

Today they were both on at the same time, so I put them on two separate TVs and shuttled between rooms. While I logged miles back and forth, each team's character was revealed.

The Yankees looked like they were done. They weren't playing that poorly but weren't hitting. Was it possible that this was the weekend the Blue Jays decided to be good? Toronto showed slick infield defense, good pitching, and enough hitting. They certainly appeared headed for 3-out-of-4, and looked to be shredding the Yankees' hopes of an AL East title.

The Yankees trailed 5-1 and were giving away the division lead while Baltimore was cruising against Boston Sunday. But the Pinstripes chipped away, scoring in the 6th, 7th, 8th and 9th. They sweated through a shaky Rafael Soriano appearance and gutted out a 9-6 win behind an extremely hot Cano (15 for last 24). 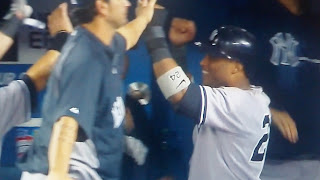 The Jets were a disaster. They got destroyed at home by the 49ers 34-0 in a game that wasn't as close as the score indicated. The defense showed a lot of heart to keep it 10-0 until 18 minutes to go. But ultimately Mark Sanchez and the offense were inept, totaling just 145 yards of offense - 100 less than San Francisco rushed for. 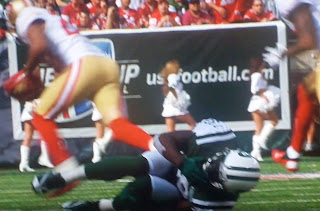 And in the ultimate adding injury to insult, Santonio Holmes crumbled down and gave up the ball in the process of grabbing his leg. Carlos Rogers raced the other way for 51 yards and a score.

The margin and the performance were staggering, but beating the 49ers was a dicey proposition to begin with. It's only one loss and the Jets are 2-2, but look well on their way to 8-8. There's nothing good to take away from the drubbing.

The Yankees finish their season with 3 at home against the Red Sox while the O's have to travel to Tampa, so that looks promising. But winning the division may get them a date with these guys: 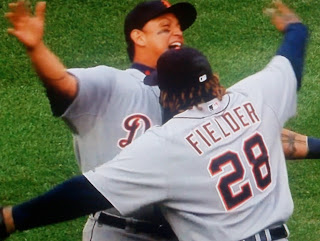 The Detroit Tigers have all but wrapped up the AL Central with a magic number of 1 over the spiraling White Sox. They've got a huge 1-2 punch in the lineup with Miguel Cabrera and Prince Fielder (who launched a clutch 8th inning HR today).

Detroit has been a nemesis for the Yankees, knocking them out of the postseason in 2006 and 2011 in the divisional round.

And things don't get any easier for the Jets with the 4-0 Texans coming to town next Monday night. At least they'll have an extra day to figure things out. And if the Jets don't and unravel on national TV, maybe the gods of karma will be kind and the Yankees will be on at the same time.
Posted by BACKTIME at 8:32 AM