There are times when the the 24-hour news cycle is gripping, and there are times we all want to throw in the towel. How many times can we handle the pre-debate analysis? Well here's one more, except this one doesn't pull punches.

It's as if all the cliches are on a loop: "Do no harm," "Frame the argument," "Have a zinger ready." But here's the problem for Mr. Romney - you can't be over-prepared. Then you seem too rehearsed, inauthentic and stiff. Not that Romney's had any problem connecting with people (Backtime's Editorial Department just unloaded an incredulous Al Gore sigh).

Romney's best moments from the GOP debates were actually off the cuff. He dismissed a floundering Rick Perry with more than one "Nice try" and he told Newt Gingrich if he was on his staff and proposed some moon colony he'd be "fired."

Romney has had plenty of time to memorize his talking points, layered arguments, and even a canned zinger or two, but he would have to have a spontaneous moment to do anything impactful. So the bar's been set pretty low.

That seems to be the prevailing view but Romney surrogate Chris Christie, the Governor of my home state, didn't seem to get the memo. Christie was on all three network Sunday morning shows (were they offering free danish?) talking about how the race would be turned "upside down come Thursday morning." Was that a prediction or a pep talk?

The President, on the other hand, has been playing a much more conservative (small "c") game the last few weeks, looking to sit on his lead. Which means now is the time to unload. It will be the first time America sees Mr. Obama with his opponent on the same stage, and should waste no time discrediting him. 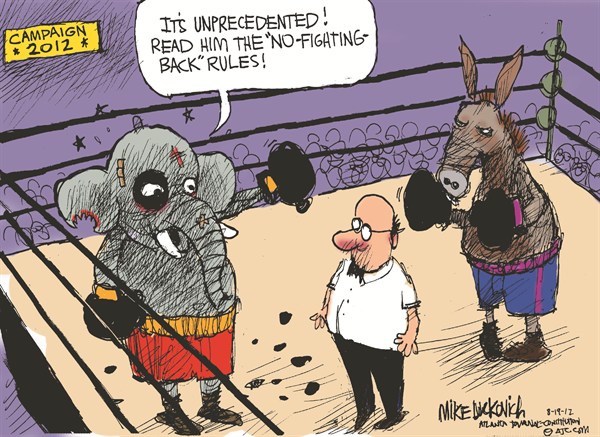 Obama has 90 minutes to hit Romney over and over on something that Romney can't possibly defend, his flexibility on nearly every issue. I wouldn't be surprised if the President drops "Etch-A-Sketch" as the soundbite moment that every media outlet runs with.

A few weeks back at the DNC everyone was raving about The First Lady's high-energy speech and President Clinton's fun, educational address. But the most effective speaker was Senator John Kerry, who laid the groundwork for the pummeling that's about to take place:

"Mr. Romney...you'd better finish the debate with yourself."

The issues are crucial and the important men will be at their lofty podiums, and Jim Lehrer will be there to be a PBS above-it-all bastion of journalistic integrity, but don't be fooled. This is all PR. And only one of the two candidates can relate to the public.
Posted by BACKTIME at 8:52 AM