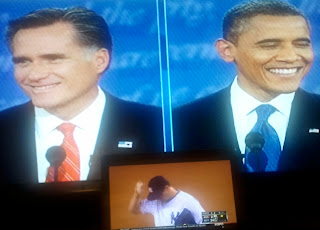 I'll get to the spin in a minute.

When you're stuck in a hotel room in Syracuse, New York, and your team is fighting for the division title on the last day of the season, you make sure you're in front of the TV. So that was the plan, watch the Yankees on TV and stream the debate so I could monitor the proceedings.

The problem was the Yankees were on ESPN, which was blacked out in Syracuse since local cable gets YES Network, but not in my hotel. So I ducked out with a friend for the first few innings to Tully's Good Times.

So I made it back to the room by 9 PM, put the Yankees/Red Sox on WatchESPN on my laptop, and the Presidential debate on the big screen - which only magnified its contents.

Mr. Romney won the debate. He took the fight to the President and the moderator, and his worst moments were no less than net equal. Whether Romney's arguments matched up with anything he proposed prior is another matter. He looked presidential, and as Backtime penned two days ago:

"The issues are crucial and the important men will be at their lofty podiums, and Jim Lehrer will be there to be a PBS above-it-all bastion of journalistic integrity, but don't be fooled. This is all PR. And only one of the two candidates can relate to the public."

The President folded his PR advantage. He wasn't relating to the public, he was Things To Do In Denver When You're Dead. But now the spin part.

First, is the Right more happy that Romney kicked Obama's ass - or are they troubled by Romney's defense of regulation, reaffirmation of his own Massachusetts health care plan, and praise of Education Secretary Arne Duncan, while claiming he would not cut education? Romney Etch-A-Sketched all night and Obama didn't call him on it.

Second, was the Team Obama plan to have Romney talk himself to death to continue to compile soundbites to counter all the policies he's planted on the trail? That would be rope-a-dope, and that might have been part of the plan. But to borrow a wonderful baseball philosophy, it wasn't just one sacrifice bunt to move a runner over, it was many. And each is a missed opportunity for a big inning and the chance to get on the scoreboard.

Third is pure spin, and as far as I could tell it's my own theory. A week ago, the GOP presidential race looked lost and there was real talk of that massive pool of SuperPAC money going to Republican senate and congressional candidates.

Now it's a race again, and while not dead by any stretch, probabilities point to Romney losing. So all that Big Money is back in the Big Race, and not siphoned out to the state and district races. So Romney's debate win may actually help Dem congressional and senate candidates.

I've heard all sorts of post-mortem commentary, comparing this debate to Bush-Kerry 1. The President stood stiff while a seasoned politician framed the debate. The challenger pulled even in the polls, but the President pulled out a close election.

And a close election is what the media wants. Blowouts are bad for business. More papers will be sold, and more TV newshours with garner ratings points.

The first Obama/Romney debate will go down in history. But will it be a turning point, or merely a plot point in the 2102 story?
Posted by BACKTIME at 7:59 AM