Getting Off The Mat Another night watching two things at once. And believe me, I much rather would've had a picture of the resurgent New York Yankees to lead today's weblog. But no such picture exists as the Yankees now face elimination, trailing Detroit 3-0 in the ALCS. More on that in a bit.

But in the meantime, our President showed some resiliency and some fight after a comatose doppelganger had apparently usurped his body in Denver 12 nights earlier.

I can't remember a debate of any kind affecting me so much. The first 40 minutes were so full of testy exchanges and personal space invasions, it made my heart race.

Certainly Romney had good moments and bad moments, and I felt he didn't lose so much as President Obama was a total badass.

My initial prediction that in a setting with average members of the electorate, Romney was bound to say something unrehearsed that would underscore his being out of touch. And that turned out to be true, on the issue of women in the workplace. Not that I think the "binders full of women" comment that everyone has run with was so bad. But more the context of women in the workplace, and talking about flexible hours so they can get home and make dinner, etc.

It reminds us that Mitt grew up, and subsequently raised his family in Pleasantville. Where breakfast and dinner were always on the table for Mr. Breadwinner. He is just now trying to re-adapt his thinking that things might be different, but he's too old to change. Except his position on abortion, and guns, and health care.

This is something the President gets. They aren't "women's issues," they are family issues and pocketbook issues.

And on this night, when Romney tried to make his own rules of the debate format, he couldn't just steamroll the moderator and the sitting President like they were long-haired hippies at Cranbrook. He was stood up to and put in his place.

When Mr. Romney did have a good comeback, asking the President to check his own overseas investments in his pension, Mr. Obama one-upped him, saying his pension wasn't as big so it wouldn't take as long to read.

And on Libya, the President adhered to The Art Of War axiom (or maybe it was from a comic book): "Never get in the way of your enemy when he is trying to destroy himself."

Hence: Please proceed, Governor. Or as those on Twitter pointed out in real time "The new fuck you."

Former GOP strategist Steve Schmidt remarked that Romney had a good debate on jobs, the economy and on energy. But he was blunt about where Mr. Romney had mis-stepped into fact-check hell:

"Romney's weakest moment was clearly on Libya. He stuck his chin out and got walloped."

Who really won and who lost the night, much like Denver, could be summed up in a wife's facial expression.

Here was the forced grin after watching your soulmate go through the meat grinder, far from the unbridled joy immediately after the first debate.

Meanwhile in Detroit, things continued along their projected path. Despite the much-needed insertion of Eduardo Nunez into the lineup, as he was the only one who could touch Justin Verlander with a solo HR in the 9th. And he turned out to be a difference maker instead of a liability at shortstop as well. 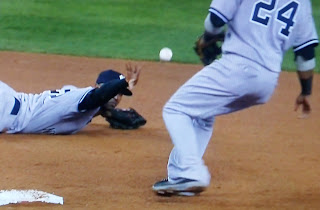 Both Nunez and Eric Chavez (starting for a benched A-Rod) made brilliant defensive plays to keep the game at 2-0 to set the stage for the 9th inning rally. But Jim Leyland and the Tigers smartly went to ex-Yank Phil Coke rather than the super-combustible Jose Valverde to close it.

Now the Yankees face the near-impossible task of winning 4 straight to get to the World Series. It makes me remember 2004 and the curse I placed on my own team when the Yanks took a 3-0 ALCS lead over Boston.

We were in Toledo for a football game, and the Yankees had just won Game 3 going away, 19-8. I put my arm around Bubba, a lifelong Sox fan, and out of pure placation I uttered the following words:

"Just because it hasn't been done, doesn't mean it can't be done."

The Red Sox tied the game in the 9th against Mariano Rivera in Game 4, ultimately winning in 12; and then they won Game 5 in 14 innings.

Game 6 was the Curt Schilling/bloody sock game, and I didn't see it though I listened to every pitch as I drove my family through the night from Omaha to Kalamazoo. We were moving!

The apartment in Kalamazoo was cable-ready, so my first night in my new home was going to be Game 7 of the ALCS. But there was no celebration for my guys, and there was no drama. Kevin Brown got lit up by Johnny Damon and shut down Derek Lowe (both later found their way to the Yankees) and the long Michigan winter was upon us.

But it was in my 3 years in Michigan that I fell in love (sort of) with another team, the Detroit Tigers. During my time there, they went from doormats to league champions. Day-in, day-out, I watched an all-out CF who could actually hit and tear up the bases named Curtis Granderson, and a rookie pitching  sensation named Justin Verlander.

I will cheer like hell for the Tigers should they advance. But first there's CC Sabathia tonight to get the Yankees off the mat, and we'll take it one at a time from there.
Posted by BACKTIME at 12:18 PM