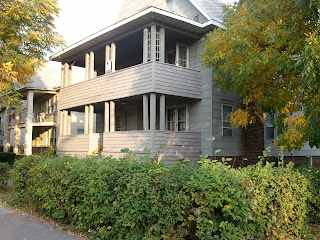 They say you can't go home again, but if you could you might ask yourself, "How did I live here for 10 months of my life?" This drab crash pad at the corner of Euclid & Livingston was home for my senior year at Syracuse (1990-91). The alma mater has changed, but still remains much the same.

It isn't a social trip so a lot of reminiscing got left on the cutting room floor. I did have time to offer a tour of our production facilities to some grad students and their professor. That's either paying it forward or creating future competition. 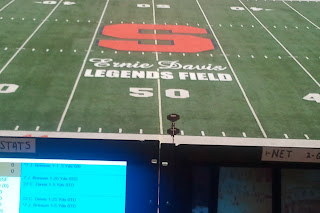 We hit the legendary Dinosaur Bar-B-Que for an outstanding dinner last night. If a couple of guys in our traveling party knew who owned the establishment, a walkout would've been staged. So it'll be our secret.

Breakfast this morning was at my favorite all-time campus hangout, Cosmo's. While much on Marshall Street has transformed around it, Cosmo's remains the old-school diner it's been since 1959. 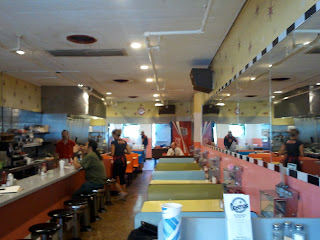 An omelet, toast, juice and coffee was still under $7, but there were additional "expenses." An extra quarter - to be exact. 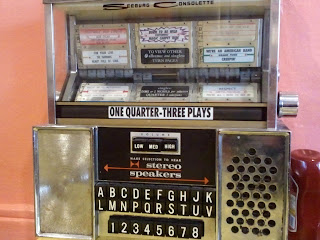 Classic tunes too. I went with Don't Fear The Reaper, Sultans Of Swing, and then selected N1 to finish off the set. 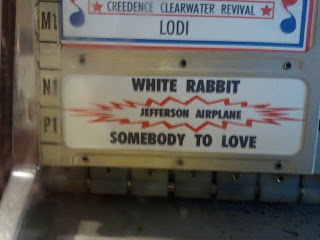 I went next door to Manny's to pick up some gear for the kids, and some socks (which I forgot to pack). Syracuse hosts Pitt tonight in their last-ever Big East football opener, as they head to the ACC next season.
Posted by BACKTIME at 10:07 AM