When It All Crumbled: The 2012 Tipping Point

It was shortly after Midnight, Sunday morning October 14th. A freak play in the 12th inning cost the Yankees their shortstop, leadoff hitter, and captain. More importantly they lost their rudder - and their soul.

The Yankees bats were barely alive before Derek Jeter went down, and flatlined after. Hiroki Kuroda pitched his ass off the next day, but he was playing alongside The Walking Dead, in a sneak preview of the season premiere later Sunday evening.

Joe Girardi didn't have any answers. All the magic moves he made all season suddenly collapsed. And where was the on-field leadership going to come from?

Ichiro Suzuki? Claims he doesn't speak English. And if he did...

People talking without speaking. People hearing without listening... And no one dared disturb the sounds of silence.

Because they all took their silent cues from one man. 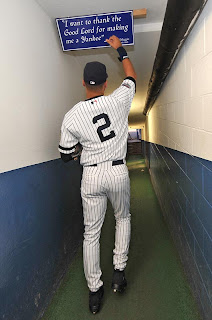 If Jeter had been lost like Mariano Rivera, in May, the team could have (and ultimately would have) found their way. Leaders would have been born after the shock wore off. But on October 14th the Yankees went into shock, and by October 18th they weren't yet out of it. Which of course meant they were out of it.

Do you think, do you really think the Alex Rodriguez circus would have taken off like this if Jeter was physically there to counsel Girardi in Detroit? No way.

And let's give some credit to the Tigers as well. There wasn't just a team that got swept away, there was an excellent team that did the sweeping.
Posted by BACKTIME at 6:43 AM