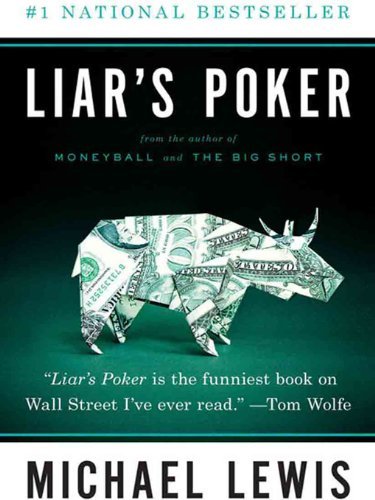 It's always a pleasure to read one of the more eclectic voices of our generation. His sports-themed books Moneyball and The Blind Side were developed into highly-acclaimed motion pictures. And in the last year, Lweis has taken to a number of different projects:

His 2012 commencement address at Princeton, his alma mater, was widely received for delivering a message that was well outside the box. The same can be said of his Vanity Fair profile of President Obama.

Or my favorite, the one-page Foreword in Mike Leach's autobiography Swing Your Sword, titled "The Importance of Peeing on the Dog."

But Lewis's bread and butter is his unique documentation of the financial world. He wrote The Big Short about the real-estate meltdown and Boomerang about the global economic crisis. But it all started with the 1989 semi-autobiographical Liar's Poker, chronicling the 1980's Wall Street boom, which of course was a house of cards.

I actually worked on a Wall Street trading desk in the summer of 1987, scribbling stock and option orders at a clearing house for small brokerages. I didn't take much away from the experience other than the blue "sell" and pink "buy" memo pads I swiped on my last day.

I went to Syracuse for my freshman year in late August, and the market crashed two months later. Black Monday was October 19, 1987 when in one day the market dipped 23%. I would've loved to be a fly on the wall on the trading desk that day. Lewis's book chronicles the events, but even more so the attitudes that led to it.

Lewis wasn't on Wall Street in physical address only. He reconstructs his entry at Salomon Brothers and quick ascension through the London bond trading desk to his confirmation as Big Swinging Dick (his words, not mine).

Stock (equity) trading was a banishment at Salomon. Bonds were where it was at, especially mortgage bonds. Lewis paints a bunch of fat piranhas playing huge gamblers, using money to make money in the most Machiavellian manner, and moving tens and even hundreds of millions of dollars within seconds.

"There was a phenomenon known at Salomon as a priority. A priority was a huge number of bonds or stocks that had to be sold, either because selling them would make us rich or because not selling them would make us poor. When Texaco teetered on the brink of bankruptcy, for example, Salomon Brothers owned about one hundred million dollars' worth of bonds in the company. There was a real danger that these bonds would become worthless. Unless sold to customers, they could cost Salomon a great deal of money. Sold to customers, of course, they would cost the customers a great deal of money. That, it was decided, was the best thing to do. Texaco bonds therefore became a priority for the Salomon sales force." (p. 224)

After making $225K as a 27-year old, and that money went a little further in 1988 mind you, Lewis decided to hang up his suspenders and phone bank.

"My father's generation grew up with certain beliefs. One of those beliefs is that the amount of money one earns is a rough guide to one's contribution to the welfare and prosperity of our society." (p.307)

Lewis left Salomon Brothers to contribute to society rather than merely profit off of it. He would modestly have you believe (refer to the Princeton speech) that he achieved what he has in life by luck, a series of fortunate events.

I think there's some truth to that, but it's what you can do with the ball when it's fortunate enough to come your way. Lewis just happened to be sitting next to the wife of a Salomon manager at a royal dinner while at grad school in London. He just happened to leave a lucrative career in investment banking to become an influential writer.

I like to say "things don't happen for a reason; there's a reason things happen." All of our decisions aren't perfect, Lewis after all has been married three times. But more often than not, we make our own luck.

I like Lewis's work a lot. So I picked up Liar's Poker hoping to understand how banks could take on this much risk, and learn about leverage buyouts and the like. I hoped a straight-talking and pretty humorous writer could dumb it all down for me. He was only partially successful. I need to get an MBA. Maybe I can change my own destiny.
Posted by BACKTIME at 8:10 PM