I have this coming weekend off, before a double-up week and a turbulent month. November is the nexus of my year. The crossover month of college football and college basketball accounts for almost a quarter of my yearly haul. Which means I'll be seeing a lot of this: 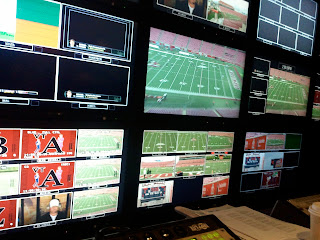 So while enjoying the calm before the storm (if you will), and entertaining the extended house guests (Sandy refugees), I thought I'd outline a typical week during college football season. Hopefully I can do this without unearthing the Colonel's secret recipe, then everyone could be a TV producer and I'd be out of a great career.

Early in the season college football games are determined about two weeks out. But when it comes down to nut-cutting time in late October and November, every week is crucial to conference and national championship chases.

Multiple networks coordinate with the conferences for optimum timeslots ("windows") in what are known throughout the landscape as "six-day picks."

So early Sunday afternoon, when we're with or families or watching NFL, we learn the site of next weekend's game.

As it's family time for the rest of your crew, you generally don't coordinate with anyone except for a quick e-mail check-in. Personally, I try to take 30 minutes out ASAP to send notes to the Sports Information Directors (SIDs) of both schools to let them know contact info for the members of our broadcast team.

For the visiting SID, I query as the best timeframe for conference calls with the head coach, coordinators, and possibly the QB. For the home team, I try and nail down a meeting time on Friday for in-person meetings with their coaches and selected players.

On Sunday night I put a preliminary list together for the Production Assistant (PA), for features to edit or clips to pull for our matchup. That way when he/she gets to work on Monday, they can start their scavenger hunt for our video needs.

The first call on Monday is to travel. Many college towns have limited airport capacity, so you'd better call quickly and get a seat grabbed. There are certain places like State College or Baton Rouge where you've got no shot six days out, and you'd better plan your alternate airport.

The hotel situation is marginally better. These games didn't magically appear out of nowhere, and a certain number of rooms have been blocked for TV. But sometimes there aren't enough for the entire crew, so you have people staying at different hotels.

There is a 30-minute operations call, where the producer and director get on with the technical people and go over everything from equipment to crew to general logistics and schedule.

You'll want to touch base with your SIDs, and make sure their game notes are getting out. Then you go back and forth a couple of times on coaches' meetings, making sure that we can do a time that is mutually agreeable to both the coaches and our talent.

At 4 PM, there's a 60-90 minute web conference led by the Coordinating Producer (CP) of college football. At this point we go over the highlights (and some lowlights) of the previous weekends, review video clips, ratings, sales, and production initiatives for the coming week.

Attendance isn't taken, and the power point is available for the Webex conference after the fact, but if you miss the call you could be called on out of the blue to explain something from your past game. It's the TV production version of bed-check.

This is the quietest day of the week. There are some follow-ups on some loose ends, but mostly it's just homework on the teams.

I dissect the game notes and articles from the team's release. I generally do one page on the team as a whole, one page on the offense (names, numbers, position, stats), and one page on the defense and special teams. So three full pages on my legal pad, and the process takes about 90 minutes.

I try to do the visiting team research on Tuesday, and usually do the home team on Wednesday, or Thursday on the plane if I'm behind.

This is when we usually have the call with the visiting coaches. It could be early in the morning or late in the afternoon, it depends on the individuals involved. It is generally attended by the play-by-play announcer, analyst, reporter, producer and director.

The head coach gives you the big picture stuff, while the coordinators go down the depth chart. The talent do most of the talking, but I've done 90 minutes of research of my own so I'll have a couple of questions too.

The flight is Thursday, usually mid-morning, so you pack your work bag and a suitcase before you go to bed.

I get ready to be gone for a couple of days: make sure the latest load of laundry is at least in the dryer, make the beds, take out the trash, water the plants, turn off the AC, and set the alarm.

The travel day usually involves two flights from Savannah. So you make your time work for you both on the plane and in ATL airport. I've learned to prefer this even over a 5-hour drive because you can't get any work done in the car besides phone calls.

So I make sure my home team research is done, I've got my sales and promos obligations all checklisted, and put together a graphics list for my Associate Producer (AP).

I also make sure I bring a book for the plane, so I can let my mind wander off for at least 15 minutes at a time on takeoff and landing.

When on the ground, there's often a late afternoon walkthrough at the stadium to go over camera positions and details with operations and stadium personnel.

Thursday night is either a couple hours on the laptop in the hotel room consolidating my format with some room service, or a night out with colleagues, or a combination of the two.

This is the busiest day by a mile. When you get to site, the truck is parked and powered, but nothing is yet "patched" so the truck is essentially just office space until any production can get done - you have to hope the wireless internet is up and running. It's also a good time for face-to-face time with your crew.

Coach meetings are generally late morning. Some meetings are quick and easy, some are "hurry up and wait." Some provide food, some don't. So lunch plans are on the fly.

And there are always some sort of technical issues, logistical loose ends, or a UPS package that didn't get to site. You find out what trouble needs to be shot and put it on your list for game day.

I also make sure my "format" is printed out, copied, and stapled. The format is everything that goes into the show: the open, pregame responsibilities, sales, promos, graphics, clips, reporter items, and schedule. The in-truck wireless printer is the greatest invention since in-flight internet and the motorized golf cart.

Friday night's plan depends entirely when your game kicks off on Saturday. If we have a day game, then we have our meeting on Friday evening. If we have a night game, the meeting is Saturday morning.

The meeting is in an antiseptic hotel meeting room with a whiteboard and a TV/DVD player. The major advantages in a Friday night meeting is that there's some hot food and bottled beer, rather than continental breakfast and hotel coffee.

The efficiency of the service and level of the food varies wildly based on the quality of the hotel. For example, the Four Seasons in Austin, Texas is a much better bet than the Holiday Inn Express in Starkville, Mississippi. That's when you might as well throw down your own credit card and bring in the Qdoba taco bar and buy a box of sangria. But it is what it is, and you get what you get.

I lead off the meeting with our base storylines, the analyst goes over Xs and Os, we review the format top-to-bottom. At that point I like to stay "the format is written in ink, but not in stone," and I accept all modification suggestions (certain announcers don't exactly suggest).  We go over the schedule, and divvy up the parking passes.

At the end of a Friday meeting, we figure out who's going out and who's staying in, and hopefully somebody else has a plan on where to gather, or they'll hear my disdain, "Do I have to produce everything?"

The best is a noon game. Despite the way-too-early wakeup call, you're done in time to catch a plane home. When I lived in Kalamazoo, I was on the Big Ten noon game in 2005 and 2006. I could reasonably drive home from 9 of 11 Big Ten sites (excluding only Minnesota and Penn State) and I'd often be in my living room by 8 PM.

A 3:30 game is OK. It ends too late to fly home, but in enough time to get a nice dinner in town and get to bed at a reasonable hour. Night games just suck. It takes an hour to get out of a packed stadium parking lot, no bars are open, and there's only time for about 3-4 hours of sleep before I catch the first flight home.

But make no mistake, the game is the fun part. Everything else is just grunt work.

Live television is the ultimate mix of stress and stress release. I make more decisions in 3 hours than most people make in a month. But it's not perfect. Sometimes you make bad decisions. Sometimes you are accountable for other people's mistakes. The phone could call from HQ at any moment and take you completely off your game. Sometimes events conspire to create head-shakingly bad TV, which I can tell you is like an out-of-body experience.

Sometimes there's a suit right there in the truck over your shoulder - which generally isn't as bad as you think - they get paid to make decisions too. They can immediately answer your questions, work as a go-between with the network or the school, and can get you off the hook if there's a problem. The downside is you're not always producing your game.

It's rare that people aren't in good humor after the show. Everyone had the adrenaline rush, and now whether you had an "A" game or not, you got through it. Mistakes are usually fixed posthumously when brilliant minds merge on the ride back to the hotel. But as they say, the game is already on Mars by then. All you can do is start getting ready for the next one.
Posted by BACKTIME at 7:22 PM