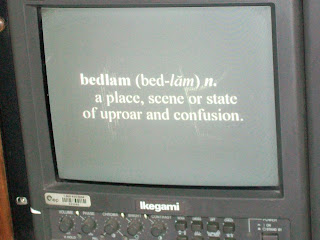 Those of you who follow college sports know that "The Bedlam Series" refers to the intense rivalry between the Oklahoma Sooners and the Oklahoma State Cowboys. So that "state of uproar and confusion" is Oklahoma.

If you're a football fan first, you might think that this isn't much of a rivalry because the Sooners have won six straight on the gridiron and lead the all-time series 79-15-8. But if you're a wrestling fan (that doesn't even get a chuckle out here in these parts) you will point to the Cowboys' 34 National Championships and the overwhelming edge the Stillwaters have over the Normans on the mat.

Then there's hoops. It's a much more evenly balanced deal, with plenty of shifts in the balance of power since they began hooping it up in the 1907-08 season. Each home court is a zoo on these occasions.

It will be Senior Day and the last home game for Austin Johnson and Taylor Griffin, and effectively Blake Griffin, who will most certainly never see the light of his Junior season. Oklahoma will be a little surly, losing 3 of 4 after a 25-1 start. Oklahoma State looks to be on the good side of the NCAA fence for now. But they are still looking for a signature win for their resume and they have a relentless Senior Guard in Byron Eaton.

The alternate Webster definition for "bedlam" is lunatic asylum, which almost always refers to the TV truck housing the crew covering the game, and is occasionally outdone by manic home gyms - like the Lloyd Noble Center in Norman will certainly be this Saturday.
Posted by BACKTIME at 7:03 PM