Backtime Bracket Check: How You Doin? 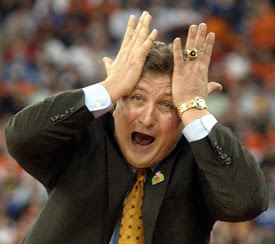 The first half of the tournament was technically over on Friday night, after 32 games were completed. The early standings came out from the "network" pool and Backtime's entry was 307th out of 308.

My only solace was that the boss was in last, the guy who sees more college basketball than anyone.

Now, after two rounds and 48 games Backtime is dead last. But we've still got 7 of our Final 8 left (minus the Mountaineers). There's still hope for the Backtime bunch to close respectably.

But where's the madness? Through two rounds, every #1, #2, and #3 seed is alive as well as two of the #4s. That is not a bracket I would ever pick because that's not what this time of year is about for me.

Fortunately, Syracuse and Kansas have advanced despite my dire projections.

Jon Scheyer's acrobatic behind-the-back-save-while-falling-out-of-bounds is the best image so far. It's even hard to hate Duke after a play like that.

Also, kudos to Missouri Frosh Kim English, who came off the bench to shoot free throws for the injured J.T. Tiller, and calmly swished both with 5.5 seconds left to lead the gutty win over Marquette.

A Pitt-Oklahoma-Louisville-Missouri Final Four is still in reach.
Posted by BACKTIME at 12:31 AM