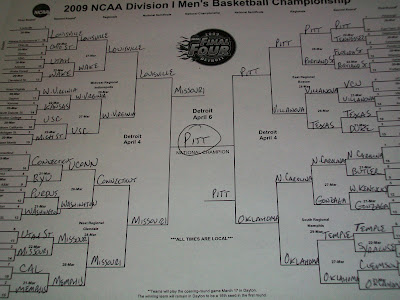 With all due respect to Mike & Mike who refer to their true bracket as their "sheet of integrity," one that is analyzed, sweated over time and time again, and then presented to the masses, there's only one real way to do this.

1) Print it the day it's released.
2) Free your mind of any personal prejudice.
3) Grab a pen, not a pencil.
4) Fill it out in 5 minutes or less, relying solely on your instincts.

Now that's an official bracket. I look over the damage I've done and have come up with the following observations:

I have definitely cleared my mind of personal prejudice (somewhat)

I have Syracuse and Kansas losing in the 2nd Round. Although I did witness Missouri methodically dismantle the Big 12 field for three days without fanfare or a spotlight. It was all business and defense and I have them reaching the final game before losing to Pitt, who has been my championship choice all season.

What about the teams touted earlier in the week?

VCU as an #11 drew a terrible 1st round matchup against UCLA. Then if they get by the Bruins, tell them what they've won: How about a 2nd Round date with Villanova in Philadelphia. Ouch.

North Dakota State - What do they have going for them against Kansas? Their nickname: The Bison. The same as Bucknell, who took them out in 2005. This Fargo story won't have a Hollywood ending.

I do not have Connecticut in the Final Four, just because they would face machine-like Missouri in the Regional Final.

Sure. Portland State in the Sweet 16. But mostly going with the power. My Final Eight has 5 Big East teams, 2 Big 12 teams, and North Carolina.

I like Oklahoma in a straight-up matchup with the Tar Heels. Blake Griffin dominates Hansbrough. There's plenty of live talent with the Sooners, and they have a Head Coach who isn't intimidated by Carolina Blue because...Jeff Capel is a Dukie.

Speaking of Duke, they'll say goodbye at the hands of Texas. USC over Michigan State. I don't have a single Big Ten team in the Sweet 16.

There it is. Official. Part of the public record. Though I may analyze, sweat, and deliver something different when there are actual chips on the table. But the Pitt Panthers will still join the Steelers bringing the hardware to the Iron City.