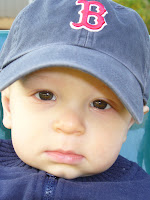 Let's go back in time. Autumn of 1987. Syracuse, NY. Booth Hall. I was on Booth 7, today's Backtime guest columnist was Booth 5. How many current friends do you go back 20 years with?

He didn't have a current picture so I bent the rules and accepted one with (presumably) the same DNA. (Just kidding Leslie, simmer down)

The Summit league championship game was played Tuesday in Sioux Falls between Oakland (MI), and North Dakota State. When I arrived in Sioux Falls, it was a balmy 35 degrees (if you don't think 35 degrees is balmy in Sioux Falls, the amount of people walking around without coats on said a lot...), but when I woke up on gameday, we were in the midst of a blizzard! I have been in Winnipeg in December, Quebec City in February, and I live in the Northeast, but believe me when I tell you that it was the coldest I ever hope to be! My only saving grace was the first rental car I have ever had in 12 years of travel with a remote car starter (I may have to get one of those at home).

Undeterred, the fans from Fargo came to the Sioux Falls arena by the hundreds and it would've been more, but the blizzard was so bad that the highway from Fargo eventually was shut down, so if you wanted to just go for the championship game, you were out of luck (if you liked the movie, insert your favorite line from "Fargo" here).

They came to watch the NDSU Bison accomplish something not done in close to 30 years. NDSU had made the transition from Division 2 to Division 1 and Tuesday became the first team since 1982 to earn an NCAA tournament berth in their first year of Divsion 1 eligibility. The Bison are 26-6, 16-2 in the Summit league. Playing in a "one-bid" league, if nothing else, focuses you on the task at hand, there are no at-large berths, RPI's, or tourney resumes to worry about. Win and your in, if you lose, there's always next year. NDSU started the same 5 that started every game for them this season, led by 4 fifth-year seniors who have basically suffered through the transition to D-1.

Oakland was the more polished team, had more weapons, their head coach is in his 25th season, they had been here before. When halftime hit, Oakland was up by ten, and it appeared the Bison were destined for the NIT.

But when Summit league player of the year Ben Woodside capped a stirring run for NDSU with a jumper with under 4 seconds left to take the lead, and after Oakland's last chance rattled out, NDSU had climbed all the way from Division 2 to a Division 1 conference championship and earned a ticket to March Madness at first asking.

When people ask whether 65 teams are too many for the NCAA tourney, remember this team who rose up and grabbed their chance to play against the big boys. Nobody will pick them to win a game (except that annoying person in your office who says that green beats blue, so OF COURSE North Dakota State will beat UConn). But they may get your attention next week, the Bison could be seeded as high as 13th, and will give some major conference team a hard time. Remember the Bison: they have seniors, confidence, they can shoot you out of the gym, and have nothing to lose, which is a dangerous combination come tourney time.
Posted by BACKTIME at 2:17 PM