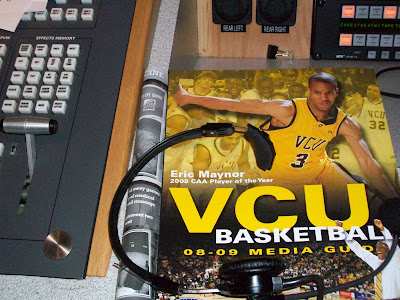 In 2007, VCU's Eric Maynor burst on the scene as a sophomore when he closed out George Mason the year after the magical Final Four run to get to the dance. Then he took the show to the next level closing out Duke, before losing to Pitt in OT.

The Senior point guard led the CAA in scoring and assists en route to his second league MVP award. And he is the ultimate closer, averaging roughly 14 of his 22 points per game in the 2nd Half. In this year's title game vs Mason, he did the closing early, assisting on the first 3 VCU hoops before sizzling for 14 points in the first 17 minutes.

I've seen Sherron Collins play all year and lead Kansas to the Big 12 Championship. The senior Maynor may be different in body type, taller and not as likely to get to the rim, but the effect is the same. Get everyone involved early. Take over late.

And he has help. A 6'9" Sophomore owned the game inside with 18 points, 20 rebounds and 7 blocks in the clincher. Word is out on The Larry Sanders Show, hey now. He is a certain NBA pick, maybe even in the Top 15, whenever he decides to leave.

You got a 1-2 combo like that and you have some March Madness history, with the McMayn Man, and you're going to be on everyone's radar. I see VCU playing in the 8-9 game, but Len Elmore called the game, and he thinks they're more of a 12. Either way, this is a dangerous team to think about in your pool. For entertainment purposes only, of course.
Posted by BACKTIME at 11:11 PM