So your team didn't make the Big Dance. There's still a lot of good action in the second tier. Think about it, even the Music City Bowl and the Sun Bowl get great ratings. Basketball-hungry fans watch the NIT.

17,000+ saw Kentucky at Creighton on Monday. There were great scenes at Auburn, Notre Dame, and San Diego State. Since I work for a 4-letter network instead of a certain 3-letter March basketball entity, I get to cover it.

And you're still going to great college towns, and hitting great spots for a TV Dinner, known to most of Americans as...lunch.

So here's the Final Four sandwich joints in the 2009 NIT: 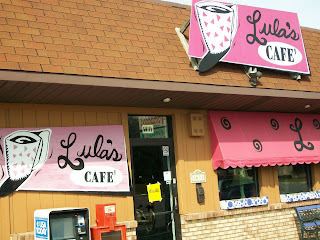 1. Lula's - South Bend, IN. Incredible soups and sandwiches. Today I had a gumbo and a grilled ham and cheese on multi-grain while enjoying a sped-up version of Trivial Pursuit. And washed it all down with an iced latte all for around $10.

2. Delice' - Omaha, NE. I used to live in Omaha and my wife asked if we could Fedex one of the fruit & cheese plates. Any place that serves a sandwich as the main dish and applesauce as a side has my vote.

3. Macado's - Blacksburg, VA. The best selection I've ever seen. If you can think of a sandwich, they probably have it on the menu with a cool name. Plenty of roasted red peppers and caramelized onions. It would likely be #1 except for Virginia's archaic go-ahead-and-smoke-in-the-restaurant laws. The local Hokies call Blacksburg a "drunk town with a football problem."

Editor's note: I live in a pretty drunk town too, but the Savannah drunk seems a little more distinguished - don't ask me to explain.

4. The Fraser Street Deli - State College, PA. I have a Penn State friend who says you can't spell Nittany Lions without N-I-T. Fortunately that means an unlimited sandwich menu, all named after legendary Lions. You could order All-Americans for a month and not get through it all. I love the "Lydell Mitchell" corned beef Reuben. Although the "Paterno" is a pretty simple tuna salad.

I work with a couple of announcer friends and we like to call the NIT the "victory lap." It's matchups that major teams won't agree to. We get good ratings. There's (relatively) no pressure. And great lunch.