Every Crew Needs a Bubba and a Turtle 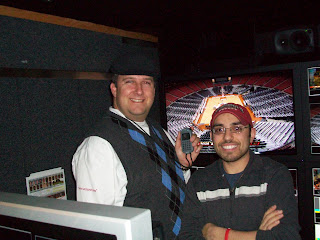 Meet the “glue” guys from the Big Monday crew. They’re top-notch character people, teammates whose sense of humor and attitude makes life on the road so much easier. Being good at their respective jobs is just a bonus.

The man on the left is our Associate Director. Robert Slawsby aka “Bubba,” is a 40-year old father of two based in Riverside, CA. Bubba’s trademarked line of “just happy to be here” has been kind of his fortune cookie through life.

Slawsby’s non-descript career as a football player at the University of Rhode Island led him through a simple twist of fate to the movie set, where he was a football consultant and an extra on the film, School Ties. There he bonded with a couple of up-and-coming actor types (Matt Damon, Ben Affleck) and wound up as their roommate in Hollywood. Bubba’s late 90s Oscar party stories are epic.

While his friends blew up after Good Will Hunting, Bubba got married and moved inland, and swapped his fledgling acting career for a stopwatch and a headset. He spent several years in various capacities on Fox NFL coverage, working on crews with the likes of John Madden, Troy Aikman, and most recently as Tony Siragusa’s sideline producer.

Bubba is a loyal colleague who’s got a legendary appetite. He’ll never hesitate to reach into his wallet to hook up a friend, especially when he’s partying like it’s 1999. I can best describe him as a cross between James Gandolfini (Tony Soprano) and Jonah Hill (the fat kid from Superbad). The likeable tough guy/clown.

Bubba is a lifelong Pats and Sox fan so he hasn’t had much to be bitter about in recent years. Maybe one day he’ll tell you the story of how this post’s writer cost the Yankees the 2004 ALCS, and changed the balance of power in baseball.

The shadowy figure on the right is Anthony DeVita, aka “Turtle,” our 27-year old Associate Producer. The Turtle moniker came about a few years ago because of his resemblance to the Entourage character. Since then, he’s lost about 70 pounds, but the nickname remains. Unless you refer to him as I do, “Tortuga” the Italian turtle.

DeVita is based in Connecticut at Worldwide Leader HQ. It’s a great location for him, because it puts him driving distance for two teams that he holds tickets for: his beloved New York Mets (also a Jet fan – talk about a glutton for punishment) and Boston University hockey, his alma mater. DeVita also played golf for the Terriers. He admits his game has “slipped” since the college years to an ugly seven handicap.

Turtle’s also a card shark. His father is a professional poker player and has competed in the World Series of Poker. Turtle says he’d consider playing professionally if he had the bankroll.

DeVita is a human encyclopedia for all things Seinfeld and Springsteen. You’d figure a renaissance man like this would have the ladies ringing him off the hook. But for all the single women reading this out in cyberspace: there’s still room inside Turtle’s shell.

Anthony DeVita has worked College Football, College Basketball, and Grand Slam Tennis expertly for ESPN, where he now is a lead graphics guy.
Posted by BACKTIME at 10:27 PM