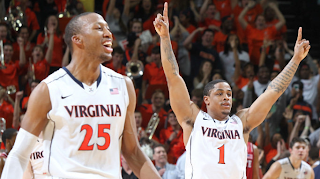 The Virginia Cavaliers took out #19 NC State tonight, so they move to 6-2 in the ACC. Not bad for a team picked 7th, with only 3 experienced players returning.

The credit belongs to the young men who are more than the sum of their parts, like Joe Harris with 22 points tonight, looking more like a guy who should be playing for Navy.

But the blueprint is from Tony Bennett, a real son-of-a-coach from Wisconsin. He is the NCAA's all-time 3-point shooter at Wisconsin-Green Bay. He played 3 years in the NBA with Charlotte, then was National Coach of the Year at Washington State, and is now in his 4th year at Virginia.

It's sort of the Wisconsin-Bo Ryan-Dick Bennett philosophy of slowing down the game to get set on defense. They held a high-scoring and high-tempo NC State team to 55 points. Now hopefully the fans have seen the toughness and start filling John Paul Jones Arena. It's a good product.
Posted by BACKTIME at 11:58 PM