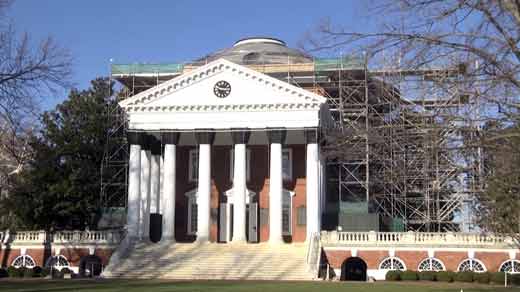 Spent a super Tuesday in Charlottesville. It was a Chamber of Commerce type day except the signature building on the "grounds" (don't call it a campus), The Rotunda, is encompassed in scaffolding at least until May of 2013.

It is the quintessential college town experience where history is preserved, and I have some history at UVA as well.

In my first game as a network college basketball associate producer, Virginia hosted the Ohio Bobcats in the Preseason NIT. I had worked 8 hours in the edit room prior to the trip on my "Shaq of the MAC" tease, which was promptly burned (recorded over) by one of our tape guys, someone I still work with to this day.

Gary Trent was "The Shaq of the MAC," and had already led Ohio over Ohio State in Columbus in the first round. They had no problems going into ACC country and pulling off the double to get to New York, where they eventually won the prestigious tournament. The team was also buoyed by scrappy point guard Geno Ford, now the head coach at Bradley.

But despite the awesome run to start the year, Ohio U finished weakly and found themselves in the Postseason NIT as well. Gary Trent went on to be drafted in the 1st Round and played 9 years in the NBA. And the brilliantly original "Shaq of the MAC" tease does not exist in any videotape library.

I drove down to Blacksburg the next morning where the Virginia football team reclaimed some honor with a 42-23 rout at Virginia Tech. Rafael Garcia kicked 5 FGs and Tiki Barber ran for a TD to highlight the Cavs' win.

The day after two of our crew guys fought with a local band's fiddler, I got into a little dust-up myself.

It was my first game on the Thursday night college football crew. I was in Virginia's football offices when they received word that the #1 recruit in the nation, QB Ronald Curry, was committing to Virginia.

I had the press release in my hand, but it was before the days of "scan and send" and there was no fax machine in the truck, so I decided to hustle it back to our mobile unit where we could shoot it and do some fancy highlighting. I was excited and hurrying and I wound up in a fender-bender in my rental in the parking lot with an adjunct professor.

I had to deal with University police, the rental car company, and a horde of new colleagues that ripped me to no end on my first show with them.

Virginia lost their home opener that night to Auburn 28-17 as Dameyune Craig out-dueled Aaron Brooks. The Cavs later finished the season 7-4 and Ronald Curry eventually de-committed, opting to play football and basketball for North Carolina. All the work for my "scoop" went by the wayside.

His college career was far overshadowed by his high school potential, but Curry did play 7 seasons in the NFL as a WR for the Oakland Raiders.

The University of Virginia was conceived and designed by Thomas Jefferson, and I've often scrounged through his litany of quotations to find something relatable to Virginia athletics. And I found one on confidence:

“We confide in our strength without boasting of it. We respect that of others, without fearing it.”

I used it in the tease of the November 26, 2011 football matchup with Virginia Tech, which was a winner-take-all battle to reach the ACC Championship game. Unfortunately for the home team, Virginia Tech walloped the Wahoos 38-0.

UVA is a great place, though their sports teams have not been great over the years. Even the Ralph Sampson days came up short of a championship. But the football and men's basketball programs seem to be on the right track. As long as they stay competitive, that'll ensure more trips to Charlottesville.
Posted by BACKTIME at 9:21 PM