I left Lexington this morning to take a conference call at The Tap Room at Blue Grass Airport. The call was 11 AM, the flight to ATL was 12:30 and the weather was miserable.

In Atlanta - flight to CHO was cancelled, so a number of us made it to Richmond  In fact some colleagues of mine were agreessive in getting seats on the next flight to Richmomd, and we got our rental car in Richmond to drop in Charlottesville. I rocked the aisle seat, overhead space, and turned my brain off reading, Neil Young's Waging Heavy Peace took my mind for and hour and a half.

But the key was what would happen to my 40-pound bag that I checked at the outset of the trip. I used the Delta site during flight and it said that it was scanned for Richmond. I thought that was pretty cool, my bags were being tracked like Fedex and I had hope I'b be whole by the time we hit the road.

We waited a little at baggage claim, but it was ultimately a sucess. Then I rented a suburban without XM. On the ride, I talked with the kids and the boss, and by the time the delay ordeal was over at 7 PM I was checking in in Charlottesvile, VA, life was in order.

So Delta got a curveball and doubled it down the line. I tip my hat. Although why when you can take a straight shot, and avoid airline headaches, 6 hours door to door on one road? 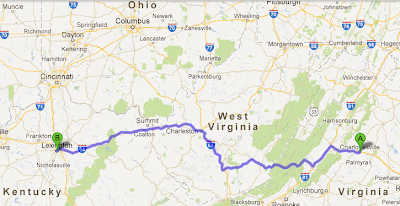 Of course I was impressed by Delta's team response to a bad situation to get everyone to Charlottesville through Richmond because of a canceled flight and bad weather. But as the plane landed there was no bad weather. It was a travel drill, The drive would have been better.
Posted by BACKTIME at 11:10 PM