Justified Season 4: The Search For Truth 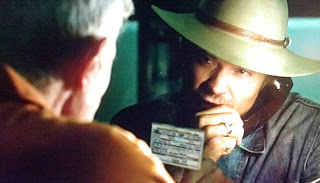 The season premiere of Justified took a little bit of a turn. It was more like a day in the life of Deputy U.S. Marshal (and unauthorized free-lance bounty hunter) Raylan Givens. Nothing seems more natural than Raylan walking on a Harlan County sidewalk, carrying some keepsakes in a Kentucky Bourbon Barrel Ale crate. 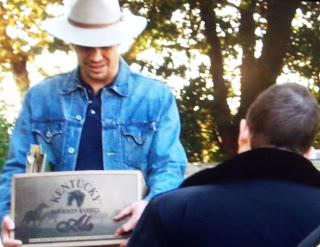 He collared a fugitive by discharging his weapon to activate a steering wheel airbag, got his car stolen with the aforementioned fugitive in the trunk, and confronted Daddy Arlo in the pen. Boyd blew up a car, a hooker shot a john in a bear costume, and old Arlo shanked a guy in the joint.

It was a very entertaining hour for the second-best show on TV (ahead of Mad Men, but still behind the king). The season premiere didn't offer up too much in the way of a criminal mastermind like Mags Bennett, or a sinister samurai like Robert Quarles, or a brash angle-player like Wynn Duffy. But there were some serious show runners revealed.

First there was the unearthed Panamanian diplomatic bag, linked to a 30-year old botched coke drop, with the mysterious drivers license name Waldo Truth. And then there was the snake-handling religious revivalist, looking to snake away (see what I did there?) Boyd's oxy clientele. Expect everything to converge with some three-way shootout before the end of the season. 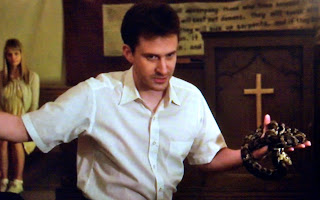 As always the dialogue was top-notch, as you would expect from characters drawn from Elmore Leonard. Boyd Crowder's vocabulary goes a little over the top, but the characters are all so well-drawn it is very forgivable. One thing the show was missing was the byplay with Raylan's boss Art Mullen, who didn't appear in this episode.

And Raylan's work "off the books" for cash is bound to have some consequences. A straight-arrow detective doesn't get ratings or sell as many novels as our favorite flawed lawman.
Posted by BACKTIME at 11:15 PM