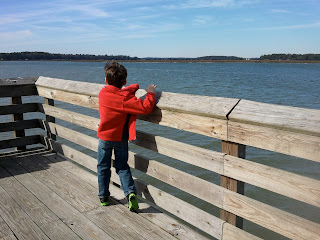 Tuesday was an infamous "staff planning day" for the Savannah public school system, so that meant a full weekday with the kids. Which of course means a lot of reading, video games, and cooking for Daddy.

Fortunately we got to break up the day with a trip to the UGA Marine Education Center and Aquarium at Skidaway Island. It was a little cold (54 and breezy an the marshes) on the nature walk but it was nice in the sun.

The aquarium itself is nowhere near the scope of Atlanta or even Charleston, but there are some beautiful fish. 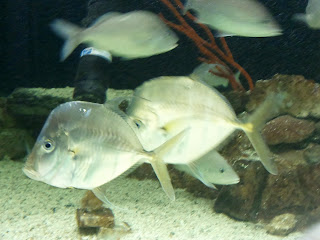 The original plan was to drive to Atlanta to go to the mega-aquarium. It was really a perfect opportunity as it was a weekday that wasn't during spring break or summer, and thus it wouldn't be a madhouse. But it was too much for one day.

Although the traffic backup from construction on the Diamond Causeway made it feel like we were in the car all the way to Atlanta. It has got to be an extra hour for anyone commuting from The Landings into Savannah. But that's a good time to zone out too.
Posted by BACKTIME at 10:12 PM