The Right To Colbert Arms 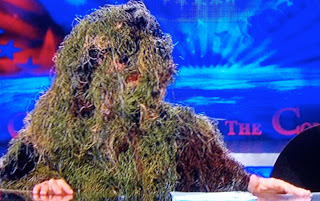 I try not to post about The Colbert Report too often because practically every single episode is worthy of a page-long retweet. But the episode from Monday January 14 is one for the time capsule.

At Eleven Dark Thirty, Colbert emerged from his bunker to take up the case of every right wing survivalist and gun nut out there with Stephen Colbert's Double Barrel Blam-O-Rama.

He of course sung the songs of the persecuted and their guns: Alex Jones, Larry Ward, Ted Nugent, and viral You Tube sensation James Yeager.

"I'm not gonna let anyone take my guns. If it goes one inch further, I'm gonna start killing people."

Colbert obviously surmised "Now why would you want to take this guy's guns?" and showed Yeager's contrite follow-up from the next day.

"I probably let my mouth overrun my logic. But I don't retract any or my statements...I don't condone any kind of felonies up to aggravated assaults or murders. Unless it's necessary."

Colbert says you can't blame the guns themselves, the civil rights victims of our time. And it's not just a coincidence that most of them are black. Or that Gun Appreciation Day falls within the same weekend as Martin Luther King Day. And after all, Ted Nugent compared gun-owners to Rosa Parks.

The interview appropriately enough was Piers Morgan, who has become a lightning rod for the fringe. Colbert pressed Morgan on Britain's draconian gun policies, and repeatedly handed him pocket-sized copies of the Constitution. The right to have guns is to keep the government from taking our guns.

It was a classic episode of what the show is all about. And whether we have armed insurrection, a military police state, nuclear winter, or a zombie apocalypse, this 30-minute block will survive in my DVR.
Posted by BACKTIME at 10:27 PM