The Right Team Won (It All) 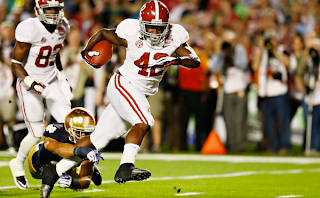 The SEC title game was the real championship. The BCS championship was a 3+hour coronation. But the same formula won both games.

In an era with spread offenses and dual-threat quarterbacks, Nick Saban's team doesn't do wrinkles or tricks. They set you up with a power running game, which puts a smart QB in position to find NFL-caliber receivers downfield. And the offensive line does their job brilliantly as well.

Let's examine Alabama's four 1st Half drives to go up 28-0 at intermission:

The game was effectively over at that point. AJ McCarron's numbers were gaudy at the end of the night: 20-28, 264 yards, 4 TD. And you have to give him his due. He's got two championships now, and is much more than a game manager. He's a weapon.

But there's no question the MVP of the game was Eddie Lacy. As he ran over, through, and around Notre Dame's vaunted defense, he sucked their will as well as all of their attention, which opened up everything else.

And here's a tip when Lacy goes pro and skips his senior season: take him on your fantasy team. He is obviously a guy who can carry the load and catch it out of the backfield. But also, he doesn't have the wear-and-tear that an every down back (think Marcus Lattimore) has endured. He hasn't needed to.

Lacy's career high for carries came in both the SEC and BCS championship games: 20.

Again it bears repeating, in an era when coaches a re-inventing the wheel each year in college football, Nick Saban sticks to the system. Repeating indeed.
Posted by BACKTIME at 9:27 AM