The News Cycle Perpetuating Itself

I can understand the constant feeding frenzy of the cable "news" networks during the run-up to the Presidential election. But the election is over, and the networks have found a formula to keep their audiences all day long. Remember when Crossfire was a 30-minute show and not a way of life?

The news, itself, doesn't do it for the American TV consumers any longer. Unless they're invested in it. Hate guns? We got a show for you. Hate Obama? We got a network for you. Want an out-of-context soundbite mash-up to back up your own views? Just stay tuned.

We root for political sides now like we root for our sports teams, and down-the-middle news reporting is now extinct. Not that it's not practiced, but because so few believe that the reporting entity is without bias. With all the black helicopters out there and such.

There is only one thing that can derail the cycle, a salacious sports scandal. The Secret Service sex romp in Colombia and the Petraeus affair are a drop in the bucket compared to Tonya Harding, OJ Simpson, Tiger Woods, Jerry Sandusky, or Manti Te'o.

As Clay Travis headlined on OutkickTheCoverage.com, the Te'o story is the kind of thing that breaks the internet, and causes the whale to show up on Twitter because it's overloaded.

A sports scandal brings both political sides together and takes over the 24-hour cycle. Even on MSNBC's (smartly named) The Cycle, they led with the Te'o fake, dead girlfriend (or is it dead, fake girlfriend?) story. They even had Tom Scocca on, Deadspin.com's managing editor who broke the story. 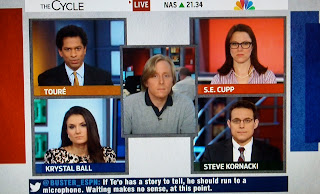 While we spend the next day or two figuring out exactly how the Te'o situation all went down - as if we ever really will - the cable news networks will move back to partisan fights and rhetoric.

And that all comes from sports, since you can't like Alabama and still respect Auburn. And 24-hour sports radio preceded 24-hour cable news.
Posted by BACKTIME at 3:48 PM