Jets Offense Could Use Some Pep 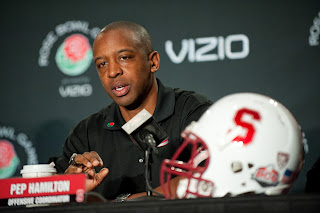 Attention New York Jets: hire this man. Reports are Pep Hamilton is already on the Jets' radar as a potential offensive coordinator. Of course, he may be interviewing at an empty desk since the Jets presently have no GM.

Pep (given name: Alfonza) currently is Stanford's OC, technically the "Andrew Luck Director of Offense." And having been around Jim Harbaugh, David Shaw, and Andrew Luck for the last 3 seasons, he has been part of a lot of victories and a big time offensive brain trust. He also has NFL assistant experience with the Jets, 49ers, and Bears. And this is the formula, get a 38-year old guy on the way up instead of some retread.

The other names thrown around have been Norv Turner (appears headed for Cleveland thank goodness), Cam Cameron (Ravens offense hasn't looked back without him), and Marty Mornhinweg. Hopefully Chan Gailey has hung up the headset at least until the Jets have found their man - then please somebody hire him - especially if you're in the AFC East.

This should be the trend right now, get an open-minded college tactician rather the stale NFL assistant/former head coach who's had some success by default and been fired 2-3 times already. So what if they've called plays in the NFL? So has Brian Schottenheimer.

Of course I could be wrong about this, I often am when it comes to the Jets. But not as often as they are.
Posted by BACKTIME at 9:34 PM